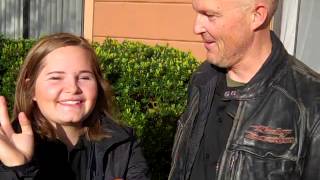 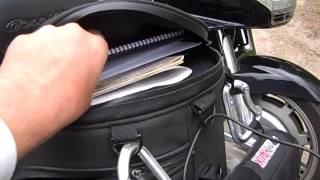 Steven Peacock, 68, of Pleasant Grove said he started riding big motorcycles six years ago. Five years ago, he saw an article that advertised the "48-10" — a ride certified by the Iron Butt Association that challenges experienced motorcyclists to ride through 48 states in only 10 days. As of 2009, only 75 people in the world had accomplished the ride.

Peacock said he was intrigued by the challenge and so he decided to invite a coworker and several friends to join him in accomplishing his bucket list item in May.

"It was on my bucket list and something I wanted to do," Peacock said. "But one thing or another got in the road, and finally this last winter I said to myself, 'I'm old enough (that) I won't be able to do this much longer. If I want to get it off my bucket list, I have to do it this year.' "

Along with Peacock, Andy Eberhardt of Bountiful, Jared Hansen of Salt Lake City, Marc Menlove of Bountiful and Grant and his daughter, Cami Sumsion of Springville, went on the ride. Cami rode as a passenger on the back of Grant's bike and is one of eight people in the world to complete the 48/10 as a passenger.

"It's a very different perception of what I had in my head," Hansen said of the experience. "I knew it would be fast-paced and not like a site-seeing trip. But I didn't fully grasp the nature of how hard you are pushing and the little down time you have."

Hansen said a motorcycle gas tank has a range of about 130 miles before it is empty. The trip was planned out meticulously for when and where to stop for gas and where to stop and sleep each night. He said the first day they had to stop for gas 12 times. The group had to save receipts from each state and keep a log of their trip to prove they had accomplished the 48/10.

To document the trip for friends and family at home, Hansen set up a blog. He said the reaction to it was shocking, with over 7,000 people following the blog at one point. Hansen posted videos, pictures and their GPS route from the trip, and he said people from all over the world followed their journey.

Hansen said Eberhardt's brother would follow their GPS tracker every day, and one day, he called them to let them know they had missed their exit in Florida.

"That was kind of shocking with the blog, that it pulled in that community of people that saw a group of people accomplish that," Hansen said. "And it felt a lot like a relay race and people were really rooting for us. It's a huge boost when you are riding 21 hours a day and sleeping four hours and people are calling you, cheering you on."

Hansen and Peacock both said the experience gave them a lot of great stories to tell, and it was a rewarding trip that changed their perspective of the United States.

"I will never talk to anyone from Arkansas without envisioning the Mississippi delta and the rice farms," Peacock said. "I'll never talk to anybody from Chicago without seeing the public housing highrises on the south side of Chicago that are deserted. If someone tells me they are from Illinois, I will envision the ride out west of Illinois and the beautiful country side with the green mountains and little valleys."

Hansen said he wants to encourage others to explore America first before taking a trip to a foreign country.

"We as Americans are probably under-utilizing that amazing opportunity that we have," he said. "Get off the main road, get out there, go see this wonderful country. From sea to shining sea, there's amazing places in between. Go get lost a little. Pick a week and take a car or motorcycle and get to know the state intimately. You will walk away with a sense of pride in your country."