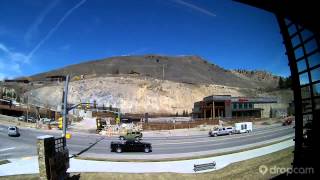 JACKSON, Wyo. (AP) — No one can say precisely when the mountainside collapsing into this Wyoming resort town will give way. But it appears increasingly likely that when it does, it's going to take a piece of Jackson with it.

Workers and residents have watched helplessly in recent days as the slow-motion landslide spanning hundreds of yards split a house in two and inched ever closer to a cluster of businesses below.

Standing at the edge of the slide zone, its rocky slope rising sharply behind him, Jackson Fire Chief Willy Watsabaugh said the rate of movement slowed Saturday, giving crews a chance to get back in and reassess the damage.

Yet the fate of the businesses, houses and apartment buildings in the slide zone remained in doubt. Experts brought in to assist the town said it was unknown when the slide will come to a rest.

Efforts taken to stop it — including the erection of large concrete walls at the base of the slope — have proved futile.

The concrete walls had been pushed around by the shifting ground and were leaning away from the slope Saturday, when they were relocated to support a make-shift road being built to give heavy equipment better access to the site.

"We're up against the Earth, and the Earth's movement is an extremely powerful thing," Watsabaugh said.

A sudden acceleration earlier in the week prompted authorities to suspend their efforts to shore up the slope as falling rocks created a hazard. The work that resumed this weekend focused on repairing some of the damage already inflicted, such as a break in a sewer line on Friday, town spokeswoman Charlotte Reynolds said.

What triggered the geologic event remains under investigation.

Authorities are looking into whether recent construction at the foot of East Gros Ventre Butte made the slope unstable. But they say there could be a variety of additional causes, including earlier construction at the site, warmer weather and a wet winter that put more water into the ground, where it acts as a lubricant for unstable rocks and soil.

By Saturday morning, the shifting earth had caused bulges in a road and a parking lot at the foot of the hill that were as big as 10 feet. The groundswell pushed a small town water pump building 15 feet toward West Broadway, the town's main drag.

Because of its more stable geology, the slope is unlikely to suddenly collapse like the March 22 landslide in Oso, Wash., that killed 39 people, experts said. More likely, large blocks of earth would tumble down piece by piece.

The ground had been moving initially at a rate of an inch a day. That is expected to speed up as time goes on, said George Machan, a landslide specialist consulting for the town.

Rockslides are common in the surrounding Rocky Mountains in the spring, when melting snow and warmer weather unleashes the region's dynamic geology. In the early 1920s, a massive slide caused by heavy rains north of Jackson formed a natural dam across a small river. The dam gave way two years later, unleashing a flood that killed six people.

But other factors appear to be in play on East Gros Ventre Butte, a small mountain that looms over the west side of town, its base dotted with homes and businesses.

The area of the landslide has been graded for roads and businesses in recent years, including a new Walgreens. That could have weakened the hillside and set the stage for the landslide, although the precise trigger remains under investigation.

Jackson resident Rick Johnson lives less than a quarter-mile from the slide area along the same south-facing slope. He said a retaining wall on his property has been shifting in recent years, but he had not given it too much thought until the slide started just down the road.

As he watched workers at the top of the slide area taking measurements of the previous night's movements, Johnson said he had no doubt that the natural geologic forces at work were amplified by the recent construction of a Walgreens at the foot of the slide.

"I think they are just messing with Mother Nature, and they didn't think of the long-term consequences," he said.

Unlike an earthquake or tornado, landslides typically are isolated and don't affect large swaths of territory. Yet they consistently rate among the costliest, most frequent and deadliest natural disasters in the U.S., said David Montgomery, a geology professor at the University of Washington in Seattle.

They can occur in all 50 states, kill 25 to 50 people a year and cost $1 billion to $3 billion annually, he said, citing a 2004 National Research Council report.

Landslides in scenic, mountainous areas like Jackson are a lot like the wildfires that occur in the same areas. Both hazards are natural events that present more of a problem when people move in and build subdivisions or shopping areas.

"When you add it up, it's actually a major geological hazard," Montgomery said. "As more people move into more mountainous environments, the opportunities for interactions between human infrastructure and people, and landslides, increase."