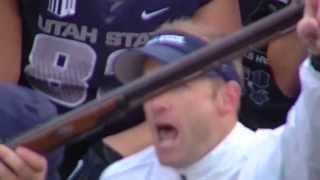 LOGAN — Utah State Athletics announced Tuesday that dates for its road games at Tennessee and at Arkansas State during the 2014 season has been changed.

Utah State's season opener at Tennessee will now be played on Sunday, Aug. 31 after originally scheduling the contest for Aug. 30. The game, which will be televised nationally on the newly created SEC Network, will kickoff at 5 p.m. (MT), marking the first known time in program history that USU will play a football game on Sunday. The SEC Network, which is scheduled for launch on August 14, 2014, will be available coast to coast on the DISH Network.

Utah State's game at Tennessee will be the first-ever meeting between the two programs and it will be USU's 18th game against a Southeastern Conference member with its last meeting being a 42-38 loss at defending national champion Auburn to begin the 2011 campaign.

Opening at Tennessee on the SEC Network on Sunday night will be a neat experience for our players and great exposure for our program.

Additionally, Utah State's road game at Arkansas State will now be played on Saturday, Sept. 20, rather than Sept. 27, moving USU's only bye of the 2014 season back one weekend.

"Opening at Tennessee on the SEC Network on Sunday night will be a neat experience for our players and great exposure for our program," said USU head coach Matt Wells. "Moving the Arkansas State game up one weekend gives us a chance to better manage our schedule as we will have two home games and two road games before our bye, and now nine regular season games after the bye instead of 10."

For Aggie football ticket information, fans can contact the USU Athletics Ticket Office over the phone by calling 1-888-USTATE-1 or 435-797-0305 during regular hours of operation. Fans can also buy their tickets in person at the USU Ticket Office inside the Dee Glen Smith Spectrum or online by clicking on the "Buy Tickets" tab at www.UtahStateAggies.com.