Instead of what critics say was a premature, unsubstantiated, even arrogant announcement from the University of Utah in 1989, Stanley Pons and Martin Fleischmann themselves would have preferred to let their research unfold slowly and cautiously.

And that’s what some scientists continue doing, tinkering with experiments that are backed by several funding agencies.

What happened more than two decades ago has long since taken flight from the U., but now other researchers have picked up the tattered wings of that original experiment, believing what Pons and Fleischmann had is still worth pursuing.

Turns out that Martin and Stan were correct. There is an anomalous excess heat production.

“Turns out that Martin and Stan were correct. There is an anomalous excess heat production,” Mckubre says.

While the words “cold fusion” may have been discarded by many experimenters — preferring the term “weak nuclear force” — the production of excess heat coming from these newer devices appears alive and well.

“We really don’t know precisely what causes it," Mckubre said. "But it’s very clear that nuclear level heat comes out of the deuterium-palladium system when it’s handled in particular ways. What we’ve been doing continuously for nearly 25 years now is trying to understand the criteria or standard by which you can establish the existence of the (heat) effect.”

In this country, research is being funded mostly by two agencies within the Department of Defense: the Defense Advanced Research Projects Agency and the Defense Threat Reduction Agency. The Electric Power Research Institute is also funding projects. 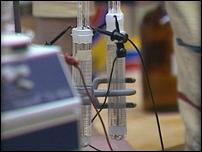 Several groups are looking at practical applications, even though the process of producing excess heat is not fully understood.

“They’re interested in commercial reality," Mckubre said. "Other people’s perception and spin is of no value in a commercial enterprise. What is, is what matters.”

And reproducing excess heat apparently is what matters at this point.

In an original Israeli project, which has now become part of research at the University of Missouri, 25 times more energy came out of devices in the form of heat than the electrical power required to stimulate the reaction. In fact, those experiments boiled water dry.

“If you have a power system capable of heating water to the boiling point with one-twenty-fifth the electricity costs, then you would have a practical system," Mckubre said.

In energy output, Italian researchers produced 400 kilojoules. If that is sustainable and scalable, “four hundred kilojoules is real and right and practical and cheap and safe as large technology,” Mckubre added.

An energy consortium in Berkeley, Calif., is projecting technology that will produce heat at 600 degrees centigrade.

These groups and others remain convinced that the peculiar reaction Pons and Fleischmann observed so many years ago simply cannot be discarded.

The paper that Martin Fleischmann wrote and submitted to the Journal of Eletroanalytical Chemistry was hastily written. It was the worst paper Fleischmann ever wrote, and he was one of Europe's most respected electrochemists.

What worries Mckubre and his colleagues is trying to reseed the scorched earth left behind from that ill-fated announcement in 1989. Mckubre believes Pons and Fleischmann were pressured to accommodate what the University of Utah administration wanted at that time.

“The paper that Martin Fleischmann wrote and submitted to the Journal of Eletroanalytical Chemistry was hastily written," he said. "It was the worst paper Fleischmann ever wrote, and he was one of Europe’s most respected electrochemists."

Fleischmann himself regretted that initial paper even to his death in 2012, but he still believed the experiment showed significant data that had never been shown before.

In this arena, according to Mckubre, there’s a frustrating built in opposition between chemists and physicists.

“If you have to continue presenting to the physics community that its traditional way of looking at fusion energy may not be accepting other mechanisms of producing more efficient and cheaper options, you stifle funding," Mckubre said. "Almost none of them are willing to accept that a mere chemist is capable of teaching them within their own discipline."

Still, sponsored by several corporations, the 19th International Cold Fusion Conference will be held in northern Italy next month where 500 researchers and theorists are expected to attend.

“We expect to have workable technology within the next five years,” he says.

But Mckubre’s skeptics say they’ve heard all these projections before.

Only when and more significantly, if it happens, will they believe?