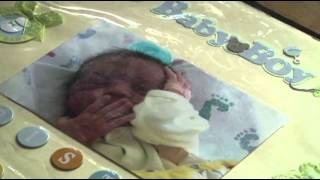 SALT LAKE CITY — Whether you call it co-sleeping, bed-sharing or simply having a “family bed,” allowing an infant to sleep in the same bed as his or her parents is a controversial subject. More controversial, however, is the way one city chose to advocate against the practice.

In November 2011, the Milwaukee Department of Health launched an advertising campaign to illustrate the risk parents take in sharing a bed with their infants. The two public service announcements showed babies sleeping in an adult bed, a large butcher knife lying nearby. The words “your baby sleeping with you can be just as dangerous” were printed above the image.

When they were released, the ads got a lot of attention from media outlets across the country.

“Is it shocking? Is it provocative? Yes.” Commissioner of Health Bevan Baker told the Milwaukee Journal Sentinel in 2011. "But what is even more shocking and provocative is that 30 developed and underdeveloped countries have better (infant death) rates than Milwaukee."

Data released last month shows Milwaukee has one of the highest mortality rates in the country: roughly 10 of every 1,000 babies born in the city die before their first birthday, according to the city’s 2013 Fetal Infant Mortality Review Report.

Nearly 60 percent of those deaths is attributed to premature birth; nearly 20 percent is related to congenital defects; and nearly 15 percent of deaths were sleep related, the report said.

By contrast, Utah's infant mortality rate is much smaller: about 4 of every 1,000 babies born in the state die within their first year of life, according to data collected in the Utah Department of Health’s Public Health Outcome Measures Report. While that seems a far cry from Milwaukee’s problem, the percentage of sleep-related deaths is just as shocking.

According to separate data collected from 2003-2005 by the Department of Health, “most deaths of newborn infants that come home from the hospital (in Utah), yet die within the first year of life, are sleep related.” Of the 100 sleep-related deaths in that two year period, one-third occurred when the baby was sleeping in the same bed as a parent or sibling

For over a decade, the U.S. Consumer Product Safety Commission has warned parents of the dangers of co-sleeping, and the American Academy of Pediatrics advocates the safest place for a baby to sleep is in a crib in the same room as the parent.

But do shocking ads like those in Milwaukee do much to curb the disturbing trend? Unfortunately, the jury is still out on that decision. The most recent numbers available for infant mortality in Milwaukee account for deaths through the year 2011.

However, one indication might be the city’s decision to change the ad campaign just nine months after it launched. The new public service announcements show an infant alone in a crib, with the words: “Babies should always sleep in a crib.”

Jordan is the senior news content manager for KSL.com. She manages and writes for the Family Focus section, which is devoted to keeping families updated on the latest news and tips about parenting, marriage, children's health and other family issues.