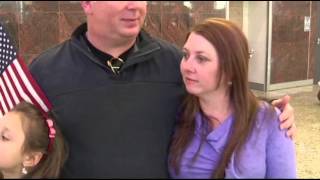 ATLANTA (AP) — An Alabama couple and the four children they adopted amid the violence in Ukraine safely reunited Friday in Atlanta's main airport.

"It's a little surreal because you dream about this day for a long, long time and then, it comes, and you're like, 'Oh my gosh, it's actually here!' " Lisa Bundy said. "Every point of today was something I had looked forward to — getting on the plane in Kiev, getting on the plane to Atlanta, seeing everybody here."

The family had planned to return together when all four adoptions were completed. But after bullets started flying past their apartment near the protests in Kiev, they decided for safety reasons he should leave with the three children whose adoptions had been completed.

"What's next is figuring out how to be a family," she said. "And going back to work. This is the easy part."

Nastia's adoption was held up by paperwork problems and a judge's illness. David Bundy said government offices kept operating despite the violence in Independence Square and the tension with Russia, and his wife was finally able to complete Nastia's adoption and obtain the paperwork to travel to the U.S.

David Bundy, 47, and his wife, 40, began looking at adoption after not having any children of their own. In the summer of 2013, the couple volunteered with Bridges of Faith, a program that brings orphans from Ukraine to Alabama for a month of cultural enrichment. Through the program, they met Nastia and made plans to adopt her. Later, they met three siblings — 14-year-old Karina, 11-year-old Max and 9-year-old Alla — and decided their home could handle four children.

The Bundys arrived in Kiev on Nov. 22 and rented an apartment near Independence Square to be close to government offices, shops and restaurants. The protests began in the square about a week before, and dealing with protesters became a daily part of the couple's routine. Bundy said the sound of gunfire and exploding homemade bombs began to frighten the children, and that's when they made the decision to split up.

Lisa Bundy and Nastia moved out of the main part of the city for safety while they completed the adoption. A judge approved it March 3, and then they began getting the passport and visa necessary to return home.

In Montgomery, David Bundy has been giving the three younger children lessons each day. Some are about America and about improving their English. Others are about how to convert metric units into the U.S. system.

He's also been cooking bigger meals than he's ever cooked.

"Life is never going to be the same again," he said.

Rawls reported from Montgomery, Ala.