PORTLAND, Ore. — A family in Portland had to call police for help when their 22-pound house cat turned against them Sunday, police said.

The family and their dog took refuge in a bedroom after Lux, their pet cat, attacked a 7-month-old baby in the home. The cat can be heard screeching in the background as the family called 911.

Police officers were dispatched to the home and brought a dog snare to try to capture the cat.

"Officers arrived and cautiously opened the door to the residence, where they saw the black and white Himalayan dart into the kitchen, attempting to flee custody," a statement from the Portland Police Department reads. "Officers were able to outwit the high-strung Himalayan, who climbed on to the top of the refrigerator, and get a snare around the cat and safely get the cat behind bars in its crate." 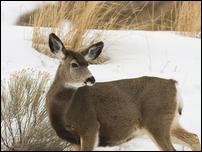 Wildlife officials say a deer that attacked a Weber River fisherman last month was territorial and did not fear people because it had been raised as a pet.

The family came out of their room when officers told them it was safe, police said.

"The cat remained behind bars in the custody of the family and officers cleared the scene and continued to fight crime elsewhere in the city," the statement reads.

Owner Lee Palmer told dispatchers the cat scratched his baby and then went over the edge when he tried to get it off of his son by kicking it. He said the cat has a history of violence and they are trying to decide whether to keep it.

"We are debating what to do," Palmer told The Oregonian. "We definitely want to keep (the cat) away from the baby and keep an eye on his behavior."