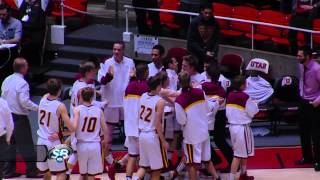 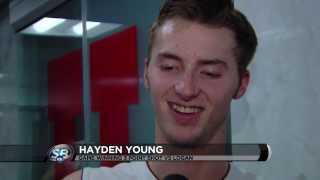 SALT LAKE CITY — Monday's nightcap on the first day of the Class 4A Boys State Tournament was worth the wait.

Hayden Young knocked down the game-winning 3-pointer with two seconds left in overtime to give the Mountain View its first playoff victory since 2005 with a 56-53 win over Logan at the Huntsman Center.

“I was probably in the wrong spot,” Young said. “I went to hand it off to Wyatt Allred, but he wasn’t there...but then it was open, so I shot it.”

Young was only in the game because starter Manuel Ortiz injured his ankle on the final play of regulation, but the junior made the most of it and seized the spotlight.

After Logan made a furious 8-0 rally to get back into the game, Mountain View had a chance to win the game in regulation on a pair of free throws but the Bruins only made one.

With the win, the Bruins move on to the quarterfinals and they will play No. 1 Bountiful at 2:30 p.m. Wednesday.