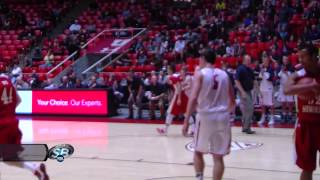 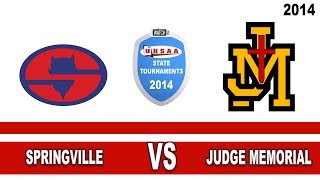 SALT LAKE CITY — Springville held on to defeat Judge Memorial, 61-59, in the first round of the Class 4A Boys State Basketball Tournament Monday at the Huntsman Center.

Judge rallied from six down in the final minutes, but the Bulldogs' last-second shot to tie or win the game fell short.

Three players scored in double-digits for Springville led by Max Terry with 17 points. He converted 15 of 17 free-throw attempts, including key free throws down the stretch that led to the victory.

Rhett Clark had a double-double with 11 points and 11 rebounds, while Max Schreiner also pitched in with 16 points for the Red Devils.

In the loss, Ryan Pauley led the Bulldogs with 25 points and Kaden Elliss finished with 16.

With 25 seconds left, Springville was called for traveling, giving the ball back the Bulldogs, who trailed by two. Springville's defense held and Judge's final attempt bounced off the front of the rim.

Springville moves on to play Roy in the quarterfinals Wednesday.