4A Playoffs: Royals rally without Chapman 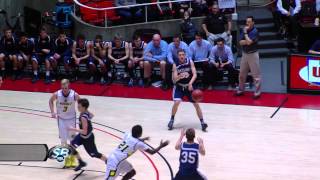 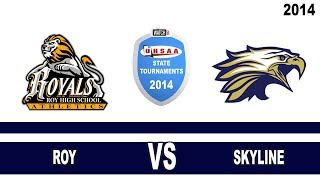 SALT LAKE CITY — Roy basketball coach Dan McClure broke the news to his players 10 minutes before they boarded the bus for the Class 4A Boys State Tournament: Star player Brekkott Chapman would not play against Skyline due to a violation of team rules.

Chapman, who has signed to play college basketball at the University of Utah, is rated by ESPN as the 48th-best senior in the country, and his team missed his presence on the court Monday at the Huntsman Center.

Chapman watched from the bench as the heavily favored Royals trailed Skyline by two points at the half before they rallied in the second half to post the 62-60 victory over the Eagles.

Skyline’s halftime lead grew to eight with four minutes left in the game and the Eagles were on the verge of a major first-round upset.

Roy responded with a 12-0 run made possible by a great defensive effort. Nate Jones, who had eight steals in the game, capped off the rally with a steal and slam.

“It’s unreal,” Jones says of the feeling he had leading the comeback.“Yes, we’re back. We were missing our big guy Brekkott Chapman so somebody had to step up.”

The Royals made free throws down the stretch to hold off Skyline and advance to Wednesday’s quarterfinals. Chase DeBoer and Cody Hobbs stepped up in Chapman’s absence and combined for 34 points and 4-of-10 shooting from the three-point line.

“I didn’t know how we’d respond to the challenge emotionally and mentally,” McClure says.“To be down eight with four-and-a-half left, and to battle back, I told them that we passed that test.”

McClure has not made a decision on the status of Chapman moving forward. He doesn’t expect to make that decision until tip off on Wednesday.