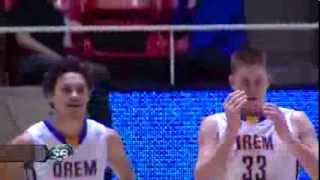 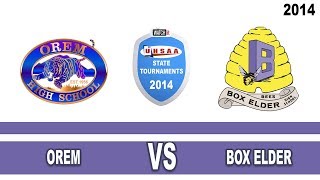 SALT LAKE CITY — Orem's Dalton Nixon scored 26 points and Quin Peters added 17 more in leading the Tigers to a 75-56 victory over Box Elder in first round of the Class 4A Boys State Basketball Tournament Monday at the Huntsman Center.

The Tigers face Kearns — a 56-47 winner over Spanish Fork Monday — at 7:30 p.m. Wednesday at the Huntsman Center. It will be Kearns' first quarterfinal contest since 1972.

Box Elder led by four points after the first quarter thanks to Shad Watson’s hot hand from beyond the arc. He knocked down three long balls in four possessions in spotting the Bees to the early lead over the Tigers.

The second quarter belonged to Nixon, however. He scored 10 points, including a pair of 3’s, to give Orem a three-point lead at the break, despite Box Elder shooting 50 percent from behind the arc in the half.

Orem carried the momentum to the third quarter where Peters scored eight straight points to push the lead to double digits. The Tigers, who outscored the Bees by 16 points in the second half, extended their lead in the fourth when Peters, who had six assists in the game, found Ethan Chatterly for a layup to put Orem up 20.