Although they aren't especially rare — dozens are spotted each year — it is unusual for an amateur to find one.

And that's partly due to Patrick Wiggin's unusual lifestyle.

A supernova is one of the brightest objects in the universe. It's a star many times bigger than our own sun that suddenly explodes.

It's astoundingly bright, but in a galaxy far, far away, and finding one isn't all that easy, unless you're Wiggins.

You have to sleep all day to keep up with Patrick Wiggins. He gets ready for bed about dawn.

And for the rest of the day, it's pretty much "lights out."

His home in Stansbury Park has a retractable roof, which usually stays closed in the daytime to protect his telescope. He said it cost about as much as his first mortgage, but it's much smaller than professional scopes that bag the most distant finds in space.

"Occasionally we do luck out and do the discovery," Wiggins said.

Almost every day when the sun goes down, Wiggins opens the roof and gets down to business.

Actually, he does most of his planet watching and galaxy gazing inside, at a bank of computer screens, working at various astronomical tasks. Some are formal projects with teams of amateurs collecting data for professionals.

Sometimes, between projects, Wiggins will have his computer aim the telescope at distant galaxies. 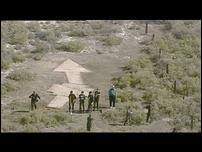 The Internet has been buzzing in recent weeks with chatter about a mysterious series of giant arrows. They trace a sort of dotted line across northern Utah and several other states.

That's how he wound up with this pair of images, taken a week apart of a supernova, an exploding superstar 78 million light years away. That means the supernova actually happened 78 million years ago.

"There were dinosaurs running around here in Utah when the light that made this picture left that galaxy,” Wiggins said. “It just blows me away how far away some things are."

And talk about bright. The supernova shines nearly as bright as its entire galaxy of maybe 100 billion suns.

You can't see the individual stars because it's so far away,” Wiggins said. “And yet, suddenly there is this light that is so bright that it's shouting out and saying 'here I am!' next to these hundreds of billions of other stars that are right next to it.”

So, it's a feather in the nightcap for a guy who outsleeps most of us in daytime, and outworks us at night.

"It was 469 nights of trying to get one success," Wiggins said.

Actually, he has to share the credit. A well-known Japanese amateur discovered the supernova a couple of hours after Wiggins, but he reported it first.

They're both officially recognized as independent discoverers of Supernova 2014G.

On Monday, NASA will publish Wiggins' supernova images on the Internet as NASA's Earth Picture of the Day.