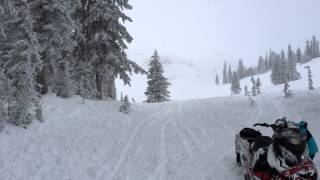 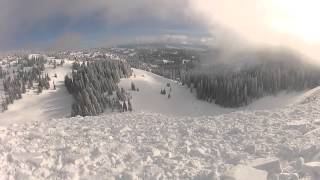 LOGAN — A 19-year-old buried by an avalanche was rescued by his family when they dug him out of the snow, according to the Utah Avalanche Center.

Shawn Casey and his two sons, Weston, 19, and Hunter, 16, were snowmobiling in Providence Canyon when they triggered an avalanche. Casey and Hunter were able to outrun the avalanche, but noticed Weston was missing after they waited a few minutes for him to join them and he did not come.

When Casey felt fingers in the glove, he started digging with his bare hands until they started to bleed, according to the Utah Avalanche Center. The family had brought a shovel with them, but it was buried with Weston. Hunter found some branches nearby and the pair dug until they found Weston's face.

When they uncovered Weston, he likely wasn't breathing and was blue in the face, according to the Utah Avalanche Center. They said his full-face helmet likely gave him a small air pocket to breathe during the 20 minutes he was buried and once Casey blew into his mouth he started breathing again.

It took another 30 minutes to fully uncover him, according to the Utah Avalanche Center. The family took Weston to the hospital where he was treated for hypothermia and a strained neck.

The Utah Avalanche Center said Weston was able to survive because he was close to the end of the deposition, where it wasn't as deep, and was wearing red gloves. Weston had been stuck in the snow and trying to dig his vehicle out when he saw the avalanche approaching and ran to the trees on the side.

A skier caught in an avalanche was rescued after some fellow skiers caught the incident on video and located the woman.

The family said they wanted to share their story so others could avoid being in a similar accident.

Casey knew there was a high avalanche warning for the area, but thought they would stay in safe terrain and told his wife they would be okay before leaving, according to the Utah Avalanche Center. They were the first people to make the trail that day and were traveling from the Fairgrounds into the Rodeo Grounds when they triggered the avalanche.

Toby Weed, an avalanche forecaster for the Utah Avalanche Center, warned there is a still a high risk for avalanches.

“There’s going to be a lingering danger, as a hidden avalanche yet could easily be triggered for the next several days,” Weed said. “There’s still the danger out there and it’s not going to heal real quickly.”