SALT LAKE CITY — A Utah-based pro-hunting group said Tuesday it has received death threats, the result of its support for a well-known huntress who posed in a picture with a dead lion.

"They get pretty hateful," said Jason Fackrell, founder of Hunters Against PETA.

Melissa Bachman reportedly hunted the lion legally in South Africa, but the outrage from animal rights activists began to flow when she posted the picture to Twitter and Facebook.

During an interview, Fackrell said he had received threatening emails and posts to a page on his website which expressed support for Bachman.

"I wish to have some money and kill you myself!" one commenter wrote. Spelling and grammar of the original comments is maintained.

Another commenter wrote, "if I have the opportunity i will put a rifle inside melissa's mouth and i will shoot."

Fackrell said he had moved once already within the past year, in part because of threats leveled by animal rights supporters over another matter. He said his contact information, including address and phone number, were posted by hacker group Anonymous on a well-trafficked activist website.

"Yeah, I do have a family," Fackrell said. "And they've been threatened before by animal rights people."

Fackrell outlined what he believes is a double standard exhibited by the people who made the threats. 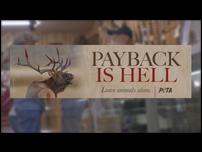 PETA to put up 'payback' billboard after elk hunter is gored

An animal-rights group announced Monday that it plans to put up a billboard targeting hunters after a Lehi man was gored in the neck earlier this month by the antlers of an elk he had killed.

"They don't think it's right to take the life of an animal, even though, I don't know, over 90 percent of the population eats meat," Fackrell explained. "But it's OK to threaten the life of a human being that kills an animal."

An attempt to seek comment out of the local chapter of People for the Ethical Treatment of Animals (PETA) regarding the pattern of threats — which is not connected to the group — drew a response from the organization's president, Ingrid Newkirk.

"PETA opposes all violence to living beings, and frankly, we question the veracity of the claim that this woman, who not only threatens violence but also carries it out, is making," the statement read. "Could the lion's family members be making reciprocal death threats? They would have cause to. What we do know is that today, more than ever, people are appalled by the idea of gunning down animals for the sake of a cheap thrill, a trophy, or a blog photo, and Melissa Bachman has been derided from Stuttgart to Singapore and Mumbai to Massachusetts. Hunting licenses have plummeted by a third over the past two decades—with most people preferring to hike, kayak, snowboard, and generally enjoy the outdoors without killing other beings—so it's no surprise when the public reacts with outrage to a small person who kills animals for fun."

Fackrell said he has reported previous threats to the Federal Bureau of Investigation, but has held off to this point with the latest threats.

He said he hoped that investigators would be more proactive in enforcement efforts, and that activists would seek to tone down the threatening rhetoric.

"You almost never see hunters getting on PETA.org and actually [writing] ‘you don't like hunting, well I want to kill you, I'm going to put a gun in your mouth and pull the trigger' — I've never seen that and I've been on their website a lot," Fackrell said. "I've never seen hunters threaten the lives of animal rights activists because they don't like hunting, so there definitely is a double standard."