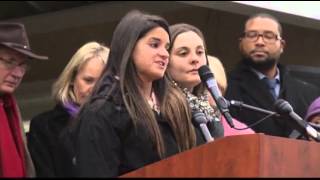 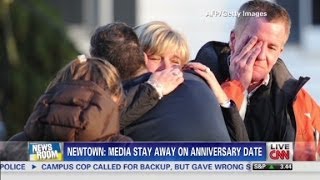 Newtown to media: Stay away on shooting anniversary

6AM: Newton asks for privacy, kindness on 1-year mark

NEWTOWN, Conn. (AP) - Newtown officials asked for privacy and joined victims' families Monday in calling for people to mark the upcoming anniversary of the Sandy Hook Elementary School shooting by performing acts of kindness or volunteering with charities.

Relatives of more than half the 26 victims said at a news conference that they planned to light a candle on Friday night in honor of their lost loved ones. They also urged people thinking of the victims to find ways to give back to their own communities.

"In this way, we hope that some small measure of good may be returned to the world," said JoAnn Bacon, whose 6-year-old daughter, Charlotte, was among the 20 students and six educators shot to death in the school on Dec. 14, 2012. She was reading from a statement released by the families of all 26 victims.

The town has no formal events planned for Saturday, and officials have discouraged the news media from coming to Newtown.

"We are trying to respect the world's interest in us, but we also have a real need in our community to gain a foothold," First Selectman Pat Llodra said.

The families also announced they have set up a new website _ http://mysandyhookfamily.org_ where each family can share information on how they are honoring victims.

"In the midst of our grief we have come to realize that we want our loved ones to be remembered for the lives they lived and how they touched our hearts," said Krista Rekos, mother of 6-year old Jessica. "We've been uplifted by the support of so many people, and we would like to keep that spirit of unity and love alive in all we do to remember those we so dearly miss."

The gunman, Adam Lanza, killed his mother inside their Newtown home before driving to the school where he carried out his rampage. He killed himself as police arrived.

The "acts of kindness" theme has been seized on by other officials, including Gov. Dannel P. Malloy and members of Congress. U.S. Rep. Elizabeth Esty and U.S. Sen. Richard Blumenthal joined the United Way and others at an event Monday in New Britain in calling for a week of volunteer service in memory of those killed.

Several memorial services are planned for the weekend in Newtown.

At Saint Rose of Lima, the Roman Catholic church that hosted the funerals of eight children, the service will include the dedication of a memorial arch and the ringing of peace bells that also were rung at Virginia Tech after the mass shooting there in 2007 and in New York after the Sept. 11, 2001, terrorist attacks.

The Rev. Robert Weiss said he planning to keep the church open 24 hours on the anniversary of the shooting, to give people a place to go and pray.

"I know that many people in the town are choosing just to be away," said Weiss, "Not just the most impacted families, but several other families are just going to leave the area for the weekend. They don't want their children subjected to reliving that day."