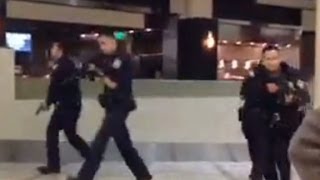 LOS ANGELES (AP) - Operations were back to normal at Los Angeles International Airport on Saturday following a car crash and false alarms that evacuated terminals, stalled dozens of flights and panicked passengers jittery after a recent shooting rampage.

An estimated 4,600 passengers were affected by the disruptions Friday night during one of the airport's busiest holiday seasons, officials said.

The chaos erupted only three weeks after a gunman shot and killed a Transportation Security Administration officer and wounded three others before he was shot and captured by airport police.

On Friday, the panic started when a woman driving on the airport's arrivals loop had a medical emergency and lost control of her SUV, hitting a woman who was walking on a sidewalk before slamming into a parking garage across the roadway from Terminal 5, Los Angeles police Sgt. Mark Guardado said.

Sounds from the crash spurred reports of gunfire among passengers inside the terminal, many of whom fled the building, airport police Chief Patrick Gannon said.

"It was determined relatively quickly that there was not a shooting," Gannon said.

Both women in the crash were injured, the pedestrian seriously, Guardado told KTTV-TV. Details on the women's conditions were not immediately available Saturday morning.

In neighboring Terminal 4, airport police received an anonymous call just after the crash reporting a gunman at a specific gate, Gannon said.

That prompted police to evacuate about 2,000 people from both terminals while they investigated. No gunman was found, and passengers were allowed to return but had to be rescreened by security.

"It took us a couple of hours to clear those terminals," Gannon said. "It created quite a disturbance."

The caller had not been identified as of Saturday.

Delta and American airlines reported a combined total of 60 delayed flights, both inbound and outbound, but no cancellations. Four arriving flights were diverted to other airports but eventually landed at LAX.

Things were running smoothly on Saturday, she said.

LAX is expected to become the nation's busiest airport in the Thanksgiving holiday period, with 2 million passengers expected to pass through between Friday and Dec. 2, Alvarado said.

A gunman on Nov. 1 pulled a semi-automatic rifle from a bag and shot a TSA officer, who later died. The shooter wounded two other TSA workers and a teacher before airport police stopped the rampage.

Authorities have said Paul Ciancia, 23, had a vendetta against the federal government and was targeting TSA officers. Ciancia has been charged with crimes that could carry the death penalty. He was released from the hospital this week and has yet to enter a plea.

Gerardo Hernandez was the first TSA officer killed in the line of duty. Final autopsy results released Friday showed that he was shot 12 times, with bullets grazing his heart and piercing other organs.