Utahn talks of changes in Secret Service after JFK assasination

SALT LAKE CITY — Following the assassination of President John F. Kennedy 50 years ago, a lot changed in the United States, and one of the biggest changes was in the way the President is protected. In 1963, at the time of the assassination, security was in place in Dallas, but since that the time, presidential security has been greatly increased.

The Warren Commission Report, which chronicled the entire investigation into Kennedy's death, said very clearly in its recommendations that the U.S. Secret Service should completely overhaul its system in terms of protecting our presidents.

Dennis Crandall spent 30 years with the U.S. Secret Service from 1970 to 2000. He was on the security details that guarded then Vice Presidents Gerald Ford, George H.W. Bush, Nelson Rockefeller and Walter Mondale. Crandall worked in offices in London and California, and he headed up the Secret Service office in Salt Lake for nine years.

Now retired and living in Davis County, Crandall talked about how presidential security has improved as a direct result of President Kennedy's assassination.

Crandall knew and worked with some of the agents who were in Dallas at the time of John F. Kennedy's assassination. He said that back then the agency was much smaller —or as he put it — "lean and mean."

There were only a couple dozen agents on duty in Dallas for the Kennedy visit in 1963, and advance security checks along the motorcade route were minimal at best. But after that day, the agency significantly expanded its advance teams. Now planning for presidential visits worldwide is more technical and meticulous. 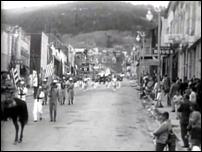 In the year before his death, President John F. Kennedy pushed through a federal loan approving a Ski resort in Park City now known as Park City Mountain Resort. It breathed new life into the struggling town and is credited for saving the community.

"For example, now we do very sophisticated high-ground coverage," Crandall said. "We have counter-sniper capability if the itinerary demands that."

"These (vehicles) that you see George W. Bush and President Obama riding in now in are very sophisticated," Crandall said. "You can shoot tires and still go. It's just a much better system."

A few years after Kennedy's death, the Secret Service assumed additional protection duties. They not only protected the president, but also his family and the families of the vice president and former presidents too. Then after the assassination of Robert F. Kennedy in 1968, secret service agents were assigned to all presidential and vice presidential candidates.

"In 1970, agents were also given the responsibility of protecting visiting heads of state and other foreign dignitaries," Crandall said.

Crandall said incidents involving other presidents forced even more changes. Following the assassination attempt on Ronald Reagan, anyone within handgun range of the protected person had to pass through a magnetometer — a practice that remains in effect today.

President Clinton's impromptu jogging on public streets near the White House caused enough headaches for agents that the Secret Service had to tell him to stop. Crandall said that President Kennedy also had his impromptu moments.

"He loved the response of the crowd and would plunge right into them," Crandall said.

Dallas was a wake-up call for the nation, and certainly for the Secret Service which took what it learned that day and essentially remade itself.

"The Secret Service did remarkably well with the resources that they had at that time," Crandall said. "And as a result of the Warren Commission and the mood in congress, the secret service was enhanced considerably since Dallas."