Bingham rides Nichols' 165 yards rushing to a 5A state championship 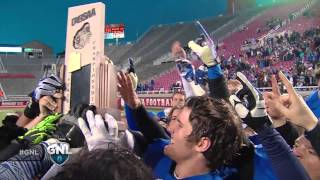 Bingham defeats Brighton for the 5A State Championship

SALT LAKE CITY — The Bingham Miners seized control of the game in the first quarter with 21 points in four drives, then closed the game in the second half to win the 5A state championship.

Scott Nichols led the Miners with 165 yards and a rushing touchdown along with a 51-yard receiving touchdown in the first quarter that would have been enough to give the Miners a victory. The Miners added 24 more points to finish 38-13.

“I couldn’t be more proud to be the coach at Bingham High School,” said coach Dave Peck. “What we represent and the way we play the game, the kids have been terrific.”

Bingham scored early and often in the first. Kyle Gearig, the Miners' starting quarterback, scored first with a 14-yard run to cap their first drive that took 2:20 minutes and covered 58 yards. A quick punt by Brighton led to another quick score for Bingham.

The Miners got the ball at the 39, got a first down, then Gearig threw back across the field to a wide-open Nichols, who scampered 51 yards for their second touchdown. After the score, Bingham pushed its advantage and grabbed an onside kick to start on the Bengals' 40-yard line.

Brighton got a big stop on that drive to keep the deficit to two scores, but when it was looking to get a score of its own, it made a mistake that might have ended the game early. Ruben Gomez came up with the first of his two fumble recoveries to bring the momentum back to the Miners.

One play later, Gearig threw his second touchdown of the game. The drive was one play and went 33 yards as Gearig hit Landen Measom for the score. The first quarter ended with Bingham up 21-0 and firmly in control.

The second quarter was slower, but Brighton finally chipped away at the lead when Robbie Hutchins scored on an 11-yard run with 2:08 left. Osa Masina joined Hutchins by doing the heavy lifting on offense. Masina ended the game with 136 yards while Hutchins had 97. After their big drive, the game looked like it might turn in the Bengals' favor.

Gearig was leading the offense down the field before the end of the half looking to pass the ball. His arm was hit, the ball flailed in the air and everything turned. Sione Heimuli-Lund grabbed the ball with green grass in front of him. He reached the goal line before he made contact with a Miner, and when he hit a player, it was Gearig.

Heimuli-Lund scored and was celebrating while Gearig was lying just outside the end zone — knocked out.

“He was knocked out for about 20 or 30 seconds, where he was just out,” Peck said. “He’s OK, he’s answering all the questions, and he wanted to come back.”

Gearig threw for two touchdowns along with his rushing score but left the game in the second quarter with a possible concussion. His replacement was Kade Jensen, a senior who had thrown nine passes and ran 31 times in his career.

“It was just time to pick it up,” Jensen said. “Just do what I’ve been told all year. It was just my chance, I guess.”

Now he was thrust into action, with his team suddenly up by just one score, 21-13 after a missed extra point, and momentum in the hands of Brighton. Pressure fell on the shoulders of Nichols, but he knew what Jensen could do.

He said he felt “a little bit of pressure, but our second-string quarterback is really good.”

Jensen didn’t have to do too much, mostly just turn around and give Nichols the ball. Brighton got the ball to start the second half and went on an 18-play 62-yard drive that ended in a field goal. The Miners featured Nichols all the way down the field.

“I don’t think there is a second half this season we didn’t win,” Peck said. “That we didn’t come out and take care of business.”

Jensen ran the ball 12 times for 30 yards and threw the ball once, without a completion, but had the win.

The defense for the Miners stepped up in the second half, not only holding the Bengals scoreless, but also forcing three turnovers in the second half. The defense sacked Brighton four times, 2½ from Nick Heninger, who also had four tackles for loss and nine total tackles.

The last touchdown of the game was a 62-yard interception return by Sky Manu with 1:24 left in the game. Parker Workman intercepted Hutchins and ran out the clock on the return.