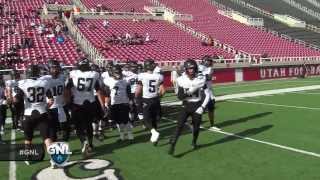 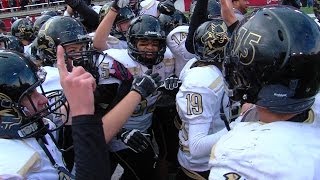 SALT LAKE CITY — It was fast becoming a trend in 3A, and now that trend continues in the new 3AA. St. George teams are dominating whatever classification they play in.

That is the case again this year as Pine View and Desert Hills have advanced to the 3AA state championship game.

It's the 10th straight year a team from St. George or Hurricane has reached a state championship game, and for the second time in three years the championship features two teams from the old Region 9.

They are back in the championship game and feature the best defense in 3AA. They give up an average of just 10 points per game.

Jake Wagner has been haunting 3AA quarterbacks all season with 13.5 sacks.

"We've been working hard since the beginning of last winter and it's so good to finally be here." Wagner said. "All the hard work paid off."

Desert Hills was ranked No. 1 for the first few weeks of the season until September 27 when they were upset by Pine view 16-13. The Panthers needed an improbable comeback to reach their first state championship game since 2007 when they were a 4A school.

Pine View quarterback Kody Wilstead connected with Tristan Duran for a 51-yard touchdown with 1 second left on the clock in the Panthers 48-42 overtime win over Juan Diego in the 3AA semifinals.

"One thing to know about this team is we're never done," said receiver and defensive back Colton Miller. "We will never get down on each other. We're always positive."

That approach came in handy against Juan Diego and throughout the season. Junior quarterback Kody Wilstead has been the most prolific passer in the state this season. He has thrown for 4,058 yards, which is 900 yards more than Logan's Chase Nelson who is second with 3,150. He trails only Nelson in touchdown passes with 35.

Wilstead fumbled the ball late in the game against Juan Diego, but he bounced back to throw a 51-yard touchdown pass and a two-point conversion to force overtime and the game-winning touchdown in overtime. He credits head coach Ray Hosner for remaining confident that he could go out and still get the job done.

"He came over to me and said, 'Hey, we're going to let them score and then were going to get back in this game.' " Kody said.

Hosner has been at Pine View since 2001 and has now guided the Panthers to four state championship games.

"I'm just so proud of our kids and the effort," he said after the win. "They dug deep."

Pine View has had great teams and players over the years but they've never won a state title.

There will be a first on Friday night with one of these teams claiming their first state title. It will also be the first 3AA state championship, but you can expect it won't be the last time a team from St. George takes home the trophy.