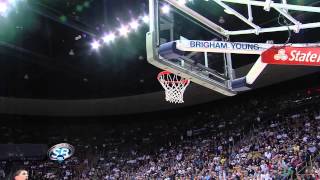 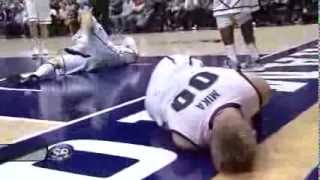 BYU freshman Eric Mika gets poked in the eye and hurts knee vs .Iowa St. 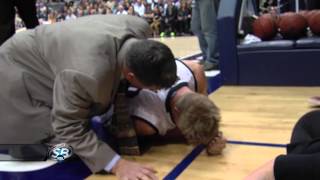 PROVO — Melvin Ejim and DeAndre Kane each scored 21 points, leading No. 21 Iowa State to a 90-88 come-from-behind win over Brigham Young on Wednesday night.

Kane, before being ejected for a flagrant 2 foul with 3:28 remaining, had a team-high 11 rebounds for the Cyclones. Georges Niang added 19 points, eight assists and five rebounds for Iowa State.

Iowa State (4-0) took the lead for good with six minutes remaining on a 3-pointer by Matt Thomas. The Cyclones stayed in front with three clutch baskets down the stretch by Niang.

The Cougars, who led for more than 26 straight minutes, got 20 points from Tyler Haws and 19 points and seven assists from Matt Carlino. Freshman Eric Mika scored 17 points and pulled down nine boards.

The Cougars (4-1) had a chance to take the lead in the final seconds but Daniel Edozie blocked a foul-line jumper by Haws with 4 seconds remaining and then hit 1 of 2 free throws on the other end.

An off-balance jumper by BYU's Kyle Collinsworth that would have tied the game at the buzzer bounced long off the rim.

After fighting back from a 12-point first-half deficit to take a five-point lead, the Cyclones let BYU back in the game when Kane, with 3:28 remaining, jammed his fingers into Mika's face before the freshman center could go up for a shot in the paint. The officials assessed a flagrant foul that resulted in Kane's ejection.

With Mika out Haws hit two free throws, and then made two more free throws after being fouled on the ensuing inbounds play to cut the lead to 82-81.

But back-to-back jumpers by Niang pushed Iowa State back in front by five. Niang hit another baseline jumper with 1:23 remaining after Haws had made two more free throws.

The Cougars, who haven't defeated a non-conference ranked team at home since 1986, used a 21-8 run midway through the first half to take a 36-24 lead. The run was led by three straight baskets by Carlino and two long feeds from the junior point guard that resulted in a fast-break layup by Anson Winder and an alley-oop dunk by Mika.

The Cyclones got within a basket five times early in the second half only to be answered by BYU each time. Iowa State finally broke through for good on Thomas' 3 from the right wing.

The Cougars stayed in front most of the game by scoring 20 points off of 13 Iowa State turnovers. BYU took 84 shots to 70 for the Cyclones.