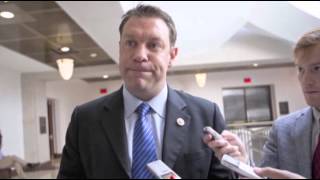 630AM: Fla. Congressman to appear in court

CAPE CORAL, Fla. (AP) - Florida Republican Rep. Henry "Trey" Radel said Wednesday he was taking a leave of absence from Congress and donating his salary to charity after pleading guilty to a misdemeanor charge of cocaine possession and receiving a sentence of a year's probation.

Radel made the announcement at a crowded news conference where he acknowledged that he had let down his country, his family and southwest Florida residents.

He said he takes responsibility for what he did, adding, "I want to be a better man."

At a court hearing earlier Wednesday in Washington, Radel told a judge, "I've hit a bottom where I realize I need help" in acknowledging that he purchased 3.5 grams of cocaine from an undercover police officer.

As part of a plea agreement Radel admitted he agreed to buy the cocaine for $250 in a Washington neighborhood on Oct. 29. After the undercover officer gave Radel the drugs federal agents confronted him, court documents show. Radel agreed to talk with the agents and invited them to his apartment, where he also retrieved a vial of cocaine he had in the home, the documents said.

At his news conference in Florida late Wednesday, Radel said he has been struggling with alcoholism and substance abuse "off and on for years." He said that he will enter an in-patient treatment program and that he was confident he could overcome his disease.

Radel recalled the support he received from constituents when his mother died. He said they made him feel like "Southwest Florida's adopted son."

"I hope, like family, Southwest Florida can forgive me for this. I've let them down, but I do believe in faith, forgiveness and redemption, and I hope to come out of this a stronger, a better man for all of you."

His office said that the leave of absence takes effect immediately and that the congressman had filed the necessary papers with the House clerk. In the meantime, he said constituent services would continue. He gave no indication he was going to resign.

Radel had said in court earlier that he wants to "continue serving this country."

A DEA official who spoke on the condition of anonymity because he was not authorized to release details of the case in his own name said Radel was identified to authorities as a cocaine buyer by his suspected dealer. The dealer had been arrested previously as part of a separate drug investigation led by a federal task force.

Court documents show that when Radel bought the cocaine on Oct. 29 he met with the undercover officer and an acquaintance with whom he had previously used cocaine. The documents said that Radel purchased cocaine on several previous occasions.

Radel's lawyer, David Schertler, said in court that his client had already entered outpatient treatment in Washington and would also seek treatment in Florida. He said his client sees the charge as an opportunity to seek help for a problem.

If Radel successfully completes his year of probation the charge against him will be dismissed and he can apply to have his record expunged.

"I know I have a problem and will do whatever is necessary to overcome it, hopefully setting an example for others struggling with this disease," Radel said in his statement Tuesday.

Karl Colder, special agent in charge of the DEA's Washington field office, said Radel was given no special treatment in avoiding arrest at the scene. He said authorities do not automatically arrest drug buyers in undercover operations, especially if they are part of a larger investigation, agree to cooperate and don't pose a threat to the public. Radel provided information to investigators at the time of the bust and has continued meeting with them since, Colder said in an interview with The Associated Press.

"Collectively there's always a decision that's made in terms of time of arrest, when we plan to arrest," he said, later adding, "It's not uncommon for us not to make immediate arrests on situations like that."

Radel appears to be the first sitting member of Congress charged with a drug offense since former Rep. Frederick Richmond, D-N.Y., was convicted in 1982 on charges of tax evasion and drug possession.

A spokesman for House Speaker John Boehner, R-Ohio, said the allegations are a matter for the courts.

"Beyond that, this is between Rep. Radel, his family and his constituents," Boehner spokesman Michael Steel said.

The Florida Democratic Party released a statement Wednesday calling Radel's conduct "an embarrassment to his district and to the state of Florida" and saying he "should resign immediately."

Radel was elected in 2012 to represent Florida's 19th Congressional District, which includes the Gulf Coast communities of Fort Myers and Naples. He was a radio host before becoming a congressman. He identifies himself on his Twitter profile as a "Hip Hop conservative" and "lover of (hash)liberty," and his Twitter account has remained active in the past few weeks, including on the day of the bust.

Among the bills he co-sponsored during his freshman term is legislation that would allow a judge to impose a sentence below a mandatory minimum, including for drug offenses.

If Radel had been arrested in Florida with the same amount of cocaine it would be a third-degree felony punishable by five years in prison under state law.