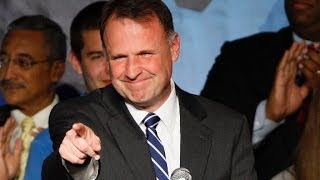 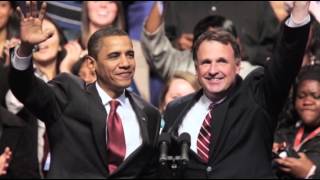 CHARLOTTESVILLE, Va. (AP) - Virginia state Sen. Creigh Deeds, a Democrat who rose to be gubernatorial nominee in 2009 despite his reserved demeanor and humble farmland roots, was stabbed early Tuesday, apparently by his son, police said.

Gus Deeds, 24, was found at his father's house in rural western Virginia, dead from what appeared to be a self-inflicted gunshot wound, authorities said.

Authorities were still piecing together a motive and the circumstances that led up to the stabbing, but "we're leaning towards it being an attempted murder/suicide," Virginia State Police spokeswoman Corrine Geller said at an afternoon news conference. She said that finding wasn't yet definitive.

Creigh (pronounced kree) Deeds, 55, and his son were the only people at the home Tuesday morning. Police were not looking for a suspect.

Deeds was able to walk about 75 yards away from his home in Millboro, despite stab wounds in his head and chest, police said. He was in fair condition at a hospital.

Police recovered a gun at the home, but Geller would not provide details about it. She also wouldn't say what the senator was stabbed with.

She said police have been able to talk with the senator, but wouldn't reveal what he has said.

Deeds made his first bid for statewide office in 2005 when he ran for attorney general and narrowly lost to Bob McDonnell in the general election. Four years later, McDonnell beat Deeds again _ this time in the race for governor _ though it was by a much wider margin.

During the race for governor, Deeds' style was somewhat unorthodox. He would listen intently to people and their worries, but rarely did he engage in lengthy conversations on the campaign trail, seemingly almost reluctant to take impose on people's time. He said then he didn't think Virginia voters were won by style points, drawing a contrast to McDonnell.

Deeds, a former Bath County prosecutor, was elected to the House of Delegates in 1991 and to the state Senate in 2001. He ran for attorney general in 2005, but lost to McDonnell, a Republican. The margin of victory was fewer than 400 votes out of nearly 2 million cast.

In the 2009 race for governor, Deeds defeated Terry McAuliffe and Brian Moran in the Democratic primary, then squared off with McDonnell again in the general election. This time he lost badly.

Gus Deeds is one of the senator's four adult children. He was studying music at the College of William and Mary, where he had been enrolled off and on since 2007, but withdrew last month, school spokesman Brian Whitson said. The college said he had a strong academic record. It did not say why he left.

During Deeds' bid for governor, his son took off a semester to join his dad on the campaign trail.

"He needs me and I need him," Deeds told a reporter in the fall of 2009, about campaigning with Gus.

"I've got to go through this campaign process but that doesn't mean I've got to be completely separated from my family the whole time," he said.

Del. David Toscano, D-Charlottesville, whose district overlaps with Deeds', said in a statement: "Sen. Deeds was very close to his son, Gus, and has taken herculean efforts to help him over the years. Our thoughts and prayers are with Creigh and the family at this difficult time."

McDonnell said in a statement the news was "utterly heartbreaking."

"Creigh Deeds is an exceptional and committed public servant who has always done what he believes is best for Virginia and who gives his all to public service," McDonnell said.

McAuliffe, now governor-elect, called it a sad day for Virginia.

"We join people across the Commonwealth and country in wishing him a full recovery," he said.

Deeds' reputation among colleagues has been as a thoughtful legislator. On social issues, he is generally to the right of party liberals, supporting abortion rights, but opposing gay marriage and gun control measures. He wrote a constitutional amendment guaranteeing Virginians' right to hunt and fish.

He proved to be a reserved campaigner in 2009, and was even described as shy by his fellow lawmakers.

"I don't like fundraising. I don't like being away from home all the time," he said during the campaign. "I enjoy the service. I enjoy the work that politics allows you to do. I don't know that I really enjoy the process that much."

Deeds spent most of his childhood in Bath County, where his family settled in the 1740s. The rural county is known for the high-end Homestead resort, but Deeds grew up on the other side of the mountain.

"I didn't grow up on the end of the county where you learn to ski and play golf as a child," he said. Deeds lived on a farm after his parents divorced when he was about 7.

Deeds' current home is set in rural farmland, and aerial photographs showed a large white house on the property and a red barn nearby.

Deeds' grandfather was the Democratic Party chairman in Bath County during the Great Depression.