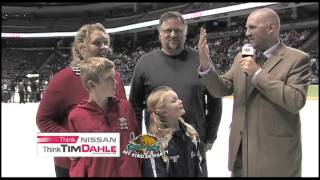 WEST VALLEY CITY — Every home game for the Utah Grizzlies has been thrilling, and Monday was no different in their 2-1 overtime win over the Colorado Eagles in the final contest on five-game homestead at the Maverik Center.

With two players in the penalty box in overtime, the Utah defense stepped up and didn't allow a Colorado score.

Utah's Danick Paquette, who was whistled for a penalty late in the third period, came out of the penalty box and scored the game-winning goal in the must-win situation for the Grizzlies.

“I felt pretty good when I scored," Paquette said.

The Eagles came into the game ready to play after beating the Grizzlies, 4-2, over the weekend.

The Grizzlies, however, entered Monday’s game with goaltender Ben Meisner making his first start in front of the home crowd.

It feels great, feels terrific. (It's) nice to get a win for the fans to. (It's) probably the loudest building I have ever heard.

Meisner played great throughout the game in blanking the Eagles in the first two periods.

Halfway through the final period, the Eagles recorded the first goal of the game to take a 1-0 lead. Utah's Rylan Galiardi delivered the equalizer moments later with his fourth goal in as many games.

With 23 seconds left in regulation, the Grizzlies were whistled with a penalty and as time expired, Paquette was sent to the penalty box for what Branham said was the right call.

Paquette later answered with the game-winner moments into overtime. Meisner got his first win of the season.

"It feels great, feels terrific,” Meisner said after recording his first win of the year. "(It's) nice to get a win for the fans to. (It's) probably the loudest building I have ever heard.”

The Grizzlies hit the road for their next three outings before returning home Nov. 29 when they start a two-game series with the San Francisco Bulls. Follow David Winkworth on Twitter @Davito23 and listen to his sports talk radio show at sportsathome.webs.com.