ELKO, Nev. (AP) — A Utah woman has been sentenced to 30 years in prison after earlier pleading guilty to burglary, kidnapping and robbery in the shooting of a woman during a botched carjacking in Nevada.

Elko County District Judge Nancy Porter imposed the sentence Thursday on Angela Hill of Sanpete County, Utah, who will be eligible for parole after serving 11 years.

Hill, 27, also was ordered to remain in the county jail until co-defendant Logan McFarland's trial, which is scheduled to start Jan. 14, the Elko Daily Free Press reported (http://bit.ly/1d4n8Wo ). Hill will be named as a witness.

Hill, also known as Angela Atwood, and McFarland were arrested Jan. 3 near Interstate 80 about 35 miles west of the Utah border in what police called a crime spree that spanned two states.

They are accused of leaving Utah in a stolen car for West Wendover along the Utah line, where police say they shot and wounded 36-year-old Rattanaphorn Keomanivong during an attempted carjacking on Dec. 31.

After the victim fought off Hill and tried to speed away, she was shot in the head and hospitalized.

Hill maintained she was not the shooter. 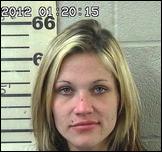 She and McFarland also are persons of interest in the slayings of 70-year-old Leroy Fullwood and his 69-year-old wife, Ann. They were found dead Dec. 31 at their home in Mt. Pleasant, Utah.

Porter said while she was unsure who shot Keomanivong, Hill's involvement led to the attempted murder. Porter said she thinks the victim likely would have been killed had she not decided to fight her assailant.

Although the judge said she thought Hill was remorseful and committed to drug rehabilitation, she branded the Division of Parole and Probation's recommendation of a five- to 15-year sentence as too light.

Hill, reading from a prepared statement, said her need to satiate a drug addiction led to rock bottom. She apologized to Keomanivong, saying she has "remorse for my irresponsible acts that caused damage to property and people."

Keomanivong did not attend the sentencing hearing. She was "not in the same shape" as before the shooting, said Deputy District Attorney Rob Lowe.

After the attempted carjacking in West Wendover, Hill and McFarland are accused of stealing a car in Wells and eluding police after a high-speed chase on I-80. They were found and arrested a few days later after a couple of ranchers spotted them from a plane.

Guns suspected to have belonged to the slain Utah couple were found near where they were arrested, police said, and jewelry and other stolen items from the couple's home were found in the trunk of a car the suspects allegedly took in Utah.