Be a Hero space ballon 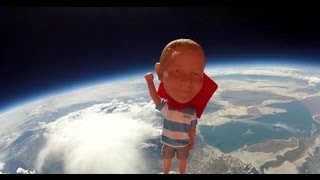 Be a Hero Space Balloon

HIGHLAND — A Highland family launched a bobblehead boy into space earlier this month to celebrate the real boy's life-saving donation to his sister.

"We promised Blair a hero party when he donated his bone marrow to his sister Natalie," explained father Tyler Fish.

Dressed in the same superhero cape and outfit as his bobblehead, the six-year-old could hardly wait for the launch. The event brought out the entire neighborhood and many people who have become heroes to the Fish family.

"We are so grateful for everybody that has helped us out and alleviated burdens off of our shoulders so that we can focus on the girls," said Tyler Fish.

Natalie Fish, 9, and her younger sister Alice, 4, inherited a rare variant of a disease where their immune system partially developed at birth but then started attacking itself.

The condition is called Leaky SCID (SCID is an acronym for Severe Combined Immune Deficiency) but is also known as the "bubble boy disease." Bone marrow transplantation is the most common treatment.

A year after Alice's bone marrow transplant the Fish family received a letter from her donor.
Michelle Kiger joined the registry while in medical school. She is now completing a residency program in pediatrics at Children's Hospital Colorado. Here is what she had to say about the experience:
"I joined the registry in medical school during a recruitment drive because it seemed like a worthwhile and easy thing to do.
I never really imagined I would be a match for someone! The call that I was a match was truly thrilling.
I was at work and remember exactly where I was sitting and who was with me at the time. At that point, they told me I was one of several potential matches.
So I was not sure what the odds were that my marrow would be the best match.
After more testing I was told they wanted me to go forward, which was an exhilarating moment - to realize I had the potential to help someone else in such a unique way.
As a resident in pediatrics, I was particularly excited to hear my marrow would be going to a 2-year-old girl (which was all I knew about Alice until these past few months).
The donation process was surprisingly easy. Everyone involved was incredibly kind and willing to work around my schedule as much as possible for the pre-op testing, and my program was wonderful in giving me time off without hesitation for the actual donation.
I was able to go home the same day, and the recovery was easier than I had anticipated. The hardest part was then having to wait and pray for a year that the transplant took without being able to hear any news or learn more about who Alice is but I certainly understand why they have the waiting period in place.
I would strongly encourage everybody to join the donor registry!"

Blair's parents say he was nervous about the procedure but understood it would save his sister's life. "He told his grandma that ‘my blood is Natalie's medicine,'" said his mother, Elisabeth.

A year and a half after the transplant Natalie is doing well and for the first time in her life living like a fairly normal child. Earlier this year Make-A-Wish granted a dream vacation to Hawaii. "I think it was the first time she was smiling and really happy in a long time," Elisabeth remembered.

Although Natalie is doing better she still requires multiple rounds of medications every day and even the slightest cough still causes her parents to panic.

"Nights are fairly restless and worrisome," said Elisabeth. "Then morning comes and we are so relieved and grateful when our girls wake up."

Alice still faces a tough battle. She also received a bone marrow transplant. Her donor was anonymous but provided a perfect match.

"It is just amazing that someone out there who doesn't know you, wants to do good," said Elisabeth Fish. However, complications developed after transplant and Alice will need another transplant.

"With Alice, for the time being, we understand how serious her case is because we just don't know how to fix it just yet," said her mother. "She is a tough cookie. We are just going forward and each day we have to find strength and sometimes it is the little things that keep us going." Planning the balloon launch provided the family with a much-needed distraction.

"It is nice to have something else to think about, to keep our chins up," Tyler said.

The launch was a success. Bobblehead Blair soared 95,000 feet into the air and touched space before the weather balloon popped.

Then a parachute deployed and brought the doll and its spacecraft safely back to Earth. GoPros attached to the spacecraft captured the entire journey on video. GPS allowed Tyler to track the journey and find the landing spot near Coalville.

"I am not as proud of the launch as I am my son Blair," said Tyler.

The Fish family hopes the YouTube video they created of bobblehead Blair's journey to space will draw attention to the need for bone marrow donation. It is easy to register online at bethematch.org.