He got used to Allyn's infectious laugh, his sense of humor, his passion for the Utah Jazz, his lofty goals and aspirations.

"He certainly wanted to be somebody who was out there in the business world doing big things," Howze said Tuesday.

Now, he thinks of Allyn's constant business ideas. And how he won't hear about them anymore.

When Allyn's friends called 911 Saturday around 7:15 p.m. after a day of boating on Bear Lake, they believed the man was suffering from heatstroke.

By 8:32 p.m., he had been pronounced dead. An autopsy by the Utah State Medical Examiner's Office determined the 22-year-old's death was caused by carbon monoxide poisoning.

Rich County Sheriff's officials said the group was in an older boat that did not have an outboard engine. They believed Allyn was the only person on the boat who spent significant time pulling skiers and swimmers out of the water near the rear of the boat where the exhaust pipe was located.

Dr. Robert Baron, medical adviser for Glen Canyon National Recreation Area, said he spoke with those who cared for Allyn and had also been told that the man had been seated near the rear of the boat, susceptible to the boat's exhaust.

"It's a classic repetitive situation," he said. "It happened in the open air. You would think it unbelievable until you think about how the gases recirculate near the back of the boat."

For more than 25 years, Baron has reviewed every report of a death, illness or injury on Lake Powell, but there were some episodes of unconsciousness and/or death that didn't make sense. 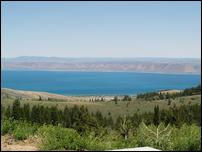 A 22-year-old man was killed by carbon monoxide poisoning over the weekend while boating on Bear Lake.

Starting in the mid-1990s, Baron said he and others started collecting data on illnesses and deaths caused by carbon monoxide and know of "800-plus cases" on U.S. waterways since that time.

"There is absolutely many more than that number," he said. "It's still an under recognized event."

For much of that time, Lake Powell accounted for 50 percent of the known cases of poisoning incidents. There was nothing about the lake that made it unique or that would explain the higher number of incidents other than the fact that Baron and those working with him were actively looking and testing for carbon monoxide poisoning.

He said a carboxyhemoglobin test is simple and affordable but isn't part of a routine autopsy and sometimes isn't ordered by those who don't know to suspect carbon monoxide poisoning. Baron has sounded the warning at boating safety conferences and in television and newspaper reports.

"There's been a lot, but it hasn't reached everybody," he said.

You can be breathing the colorless, odorless gas and you won't really even know that you're even breathing it.

Ty Hunter, boating program manager for Utah State Parks and Recreation, said carbon monoxide poisoning isn't usually on a boater's mind when they're out in the open and assume there's plenty of fresh air and movement from the boat to break up the gas. The threat, though, is real and has led to changes in state rules that prevent motorboats from operating or idling while someone is on or near the swim deck, ladder or platform or being towed within 20 feet of the boat.

Some changes in the design and engineering of boats have reduced the risks, but Hunter said any combustible engine is going to produce exhaust. He urged boaters to stay away from where the exhaust is released.

"Ride in the seats that were made for passengers to ride in," Hunter said. "Don't get up on the engine covers, don't ride back of the boat, definitely don't turn around and put your feet down on the swim deck, because you can be breathing the colorless, odorless gas and you won't really even know that you're even breathing it."

There is also the "station wagon effect" in which the air will move over the top of the boat and create low pressure areas where gas can exist regardless of whether the boat is moving. He said, depending on the concentration of gas that is breathed, poisoning can take place in seconds or after 15 to 20 minutes.

"You get out boating, you get out in the open and think it's no big deal and it really can be a big deal," he said.

It is still being determined whether Allyn died in Utah or Idaho. If counted here, it will be the ninth boating death this year, Hunter said. "We've had a lot of unfortunate circumstances that have happened this summer. Very tragic in every instance that comes along."

Howze, who flew in from Wichita, Kan., to attend memorial services for his friend, said he got the call about Allyn's death around midnight Saturday. He said he was told Allyn had passed out and never woke up.

"I didn't go to sleep for maybe the next three or four hours that night," Howze said. "Every 22-year-old has big aspirations. … I'll miss the times where we would be out and could spend an hour or so talking about things we wanted to do, plans we had when I graduated. I'll always miss his ideas."