SALT LAKE CITY — Utah was one of 32 states across the country to see a decrease in its greenhouse gas emissions in the span of a decade, according to a new analysis.

The U.S. Energy Information Association released its analysis of emissions data Monday, showing Utah at 64.2 million tons of greenhouse gases in 2010 — compared with 65.1 millions of tons in 2000.

The report notes that the profile of energy-related carbon dioxide emissions varies greatly from state to state.

"The overall size of the state, as well as the available fuels, types of businesses, climate and population density, play a role in both total and per capita emissions. Additionally, each state's energy system reflects circumstances specific to that state," the analysis said.

While some states may be near or have plentiful hydroelectric supplies of energy, other states — like Utah — boast abundant coal resources.

Coal, for example, was the state's No. 1 fuel source of carbon dioxide emissions, measured at 33.6 million tons. Next was petroleum, followed by natural gas.

In contrast, other areas like the Gulf states of Louisiana and Florida had more drastic measurements of carbon dioxide emissions coming from petroleum, with coal lagging significantly behind. 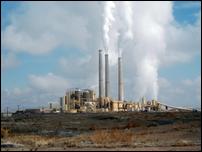 Power plants responsible for 75 percent of greenhouse gas in Utah

The nation's power plants continue to be the single largest stationary source of greenhouse gas emissions, according to new information released Tuesday by the Environmental Protection Agency.

The No. 1 overall source of greenhouse gas emissions in Utah is electric power plants, with the report noting that 34.8 million tons are being generated in that manner.

"In Utah, as in the rest of the nation, power plants are by far the largest source of CO2 emissions," said Bryce Bird, director of the state Division of Air Quality. "Of course those emissions are tied to energy consumption, so as we look to increase our energy efficiency, that is the best way going forward."

Transportation was the next biggest culprit, contributing 16.2 million tons.

Unlike other emissions across the Wasatch Front and elsewhere in Utah, Bird said the agency does not have the power to regulate greenhouse gases — authority that is retained by the federal government.

The state does compile the data as part of its permitting process.