SALT LAKE CITY — In the Saturday sessions of the General Conference of The Church of Jesus Christ of Latter-day Saints, changes came in the form of a new Young Women presidency, a staggering rise of missionary applications and service, and a woman praying in conference.

In the Saturday morning session, Sister Jean A. Stevens of the General Primary Presidency offered the closing prayer, becoming the first woman to pray in a General Conference session.

The action followed another change for women; Friday, the LDS Church announced sister missionaries would be utilized in missionary leadership positions.

The church also released its updated full-time missionary numbers Saturday. Currently, they said, there are 65,000 missionaries in the field, 20,000 have been called, and 6,000 are in the process of applying to serve.

The numbers have drastically increased since the October General Conference, at which the minimum age requirement was lowered for both men and women.

"The response of our young people has been remarkable and inspiring," said Prophet and President Thomas S. Monson of the missionary applications.

President Monson emphasized missionary preparation during the priesthood session — the semi-annual meeting for the bretheren.

Earlier this year, the church announced 58 additional missions and a new missionary training center in Mexico to accommodate the growing number of missionaries in service.

"Now we get questions like, ‘what are you going to do with all these missionaries?' The answer is simple: They will do what missionaries have always done. They will preach the gospel," said Elder Russell M. Nelson. 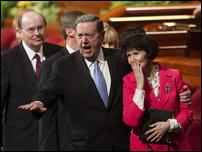 The 183rd Annual General Conference of The Church of Jesus Christ of Latter-day Saints opened Saturday morning with a session that featured the announcement of two new temples by President Thomas S. Monson and emotion-charged sermons from church leaders, including a memorable poem and testimony from 88-year-old President Boyd K. Packer.

Saturday afternoon, Sister Bonnie Lee Green Oscarson was called as president of the Young Women General Presidency, and sisters Carol Louise Foley McConkie and Evelyn Neill Foote Marriott were called as her counselors. Elder Ulisses Soares was named as the president of the Quorum of the Seventy. They will now lead more than one million 12- to 18-year-old LDS young women throughout the world.

President Oscarson previously served as the matron of the Stockholm, Sweden temple. She has taught early morning seminary, as well as acted as a ward Young Women president multiple times. She received her bachelor's degree from Brigham Young University in English, with an emphasis in British and American literature.

Her first counselor, Sister McConkie, previously served on the Young Women General Board, and holds a bachelor's degree in English Education.

Sister Marriott, who will serve as the second counselor, has served as an ordinance worker in the Salt Lake Temple, and has held various stake and ward leadership callings in Relief Society and Young Women. She holds a Bachelor of Arts degree in English Literature and Secondary Education.

Sister Dalton has served in the Young Women General Presidency since she was called in 2002 as the second counselor, and has served as president since 2008.

President Boyd K. Packer, however, focused on the unchanged stance of the church regarding moral issues. As the U.S. Supreme Court considers the legality of gay marriage, Packer addressed what he called the "tolerance trap."

"The permissiveness afforded by the weakening of the laws of the land to tolerate legalized acts of immorality does not reduce the spiritual consequences that result from the violation of God's law of chastity," President Packer said.