TUCSON, Ariz. — The human Y chromosome is one of the most studied pieces of genetic material in the history of science. Few things are as well understood. That's why it caught scientists so off guard when an African American man's Y chromosome turned out to be something they had never seen before.

Not only is the peculiar variation of South Carolinian Albert Perry's Y Chromosome rare, it has pushed back the age for the father of all men — the genetic Adam, if you will — by over 100,000 years.

"Our analysis indicates this lineage diverged from previously known Y chromosomes about 338,000 ago, a time when anatomically modern humans had not yet evolved," said University of Arizona scientist Michael Hammer, lead author on a new study detailing the latest findings on the matter. "This pushes back the time the last common Y chromosome ancestor lived by almost 70 percent."

Perry's DNA was submitted to the National Geographic Genographical Project, which seeks to study ancient human migrations through DNA markers. Analysis could not recognize Perry's Y chromosome as belonging to any known group.

Technicians at Family Tree DNA, which processes the samples for the project, compared the chromosome to some 6,000 known Y chromosomes. Eventually, they found 11 similar ones, all from a particular small village in Camaroon. That could mean the most recent common ancestor of all human males came from that region, or that later descendants migrated there. 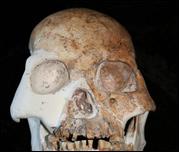 Our family tree might have a new branch. New evidence out of caves in southwest China may indicate the discovery of a new species of human, neither modern nor Neanderthal, that lived during the Stone Age.

"It's a cool discovery," Jon Wilkins of the Ronin Institute told New Scientist. "We geneticists have been looking at Y chromosomes about as long as we've been looking at anything. Changing where the root of the chromosome tree is at this point is extremely surprising."

Y chromosomes provide a very important measure of human lineage and age. They do not recombine to the extent that most chromosomes do, meaning that their structure changes relatively little over time. That makes it perfect for use as a genetic benchmark that allows us to date particular times in human history, much like mitochondrial DNA, passed down only from mother to child.

Modern humans pop up in the fossil record about 195,000 years ago, according to the most accepted estimates. However, given this new information, the most recent common ancestor of all men lived about 338,000 years ago somewhere in Africa.