The world of 'World of Warcraft'

Even if someone doesn't play video games, chances are he or she has heard of or seen advertisements for the game World of Warcraft or WoW. And 'wow' is a good word to describe this game because it is easily the most popular massively multiplayer online role-playing game of all time.

This video game boasts a population higher than the city of New York or London with more than 12 million subscribers worldwide and according to a blog at Onlineschools.org, WoW brings in an astonishing annual revenue of more than $800 million just from players in North and South America and Europe. Interestingly, the number does not include the Asian player population, which is nearly half of the total WoW population.

WoW was released on Nov. 23, 2004, by Blizzard Entertainment, which also created older favorites such as the console games Vikings (1992), Rock 'N Roll Racing (1993) and PC games like the Warcraft series beginning (1994) and Diablo (1996). Since then, Blizzard has also released popular sequels to the PC games, along with Starcraft, a Warcraft-type game set in the future.

Eleven and a half million people playing, on average, 653 minutes per week... (means) humankind spends well over 14,000 years playing World of Warcraft each week.

There are other MMORPG's made by other companies that have done well, such as Ultima Online, Everquest, Asheron's Call, Vanguard, Star Wars Galaxies and more, but none of them could have prepared the world for World of Warcraft's unheard-of fame. It's domination of the MMORPG world was instant and total.

WoW is a game played on a PC with an online connection and appeals to both young and old, male and female, and various websites say that WoW players include celebrities such as Dave Chapelle, Cameron Diaz, Elijah Wood, Jessica Simpson, Mr. T and more.

So what is it about this game that fascinates people so much that they would spend that much of their lives playing a video game, not to mention the $14.99 (depending on the subscription they choose) they pay every month to do so?

Let's start at the beginning. World of Warcraft is basically a continuation of Warcraft: Orcs and Humans. Obviously, that game was about a war between Orcs and Humans. In WoW, there are still two factions, the Horde and the Alliance. The game takes place on the world Azeroth, a large world with three main continents, separated by a large ocean. There is also a smaller continent recently discovered beneath the waves.

When launching World of Warcraft for the first time, there are some incredible cinematics that are definitely worth watching. Then players will choose their Realm based on the time zone they are in. A Realm is a server which the player's character is located on. Currently, there are over 200 servers for players in North America alone with a similar number in Europe.

After selecting a Realm, players get to choose their race. Currently there are 12 playable races each with their own unique abilities and can choose a multitude of different classes to choose from depending upon the role a player wishes to play. 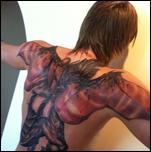 Have You Seen This? AK-47's gnarly tattoo

Utah Jazz forward Andrei Kirilenko has found the perfect way to show his love and dedication to World of Warcraft... a humongous tattoo.

Then players get to select their class. And the class they choose will determine the role they will play in the game. The roles in the game can be broken down into three basic areas: tanks, the role of taking damage to protect other players; healers, the role of healing other players' damage and DPS (short for damage per second), which is the role of doing damage to enemies. Most classes can perform only a single role, but there are also several classes that can perform multiple roles.

Once a player has chosen his or her race and class, they get to the fun part: choosing a unique name and customizing their character. Players can choose hairstyles, skin colors, facial features, hair color, horns (for certain races), ears, piercings, etc.

When this is complete, players are finally ready to enter the virtual world of World of Warcraft.

There are nearly 10,000 quests waiting for players, ranging from courier services to vanquishing a certain monster. And of course, there are dungeons to conquer, but in this game, players can conquer the dungeons over and over, while receiving random rewards each time.

But even if players don't enjoy all that slashing, hacking and spell-casting, they can still enjoy WoW. There are a myriad of professions you can choose, such as gathering herbs to make potions, mining ore to create armor and weapons, enchanting items to enhance their properties and many more. Players can even sell their wares at the Auction House for in-game gold.

This is not your typical video game. There is no way to "beat" the game. There is no end boss to defeat, no specific quest to end all quests and the game does not stop simply because a player logs off. World of Warcraft is what is called a perpetual environment, in that it is online 365 days a year. There are even in-game holiday events that coincide with real American holidays.

It is a nice break from reality where friends and even families can go into a virtual world and explore, quest, fight side-by-side with allies against a plethora of foes or just sit and enjoy a virtual sunset.

Free 10-day trial discs can be picked up at most retail or game stores or a free trial is available for download at www.worldofwarcraft.com.

Eric is the father of three and recently became a grandfather.