SALT LAKE CITY — A new report by a nonpartisan taxpayer advocacy group is calling for the end of subsidies for oil shale development, saying billions of tax dollars have been wrongfully thrown at a commercial pursuit that remains "elusive" and unproven after decades of trying.

"Since the 1980s, oil shale has been showered with billions in tax credits, price guarantees, and loan guarantees," the report by the Taxpayers for Common Sense said. "In addition, public lands have been given to private companies for oil shale research and development, without requiring the payment of rents, bonuses or royalties for facilities producing at less than commercial scale."

The report says even after that support, oil shale has yet to be commercially produced, resulting in the cost of failed enterprises being shouldered by taxpayers and small communities.

Jim Spehar, a former mayor and county commissioner from oil-shale rich Colorado, said in a teleconference Thursday that millions of dollars have been thrown at oil shale development at a cost to small communities that must bear the brunt of infrastructure costs. 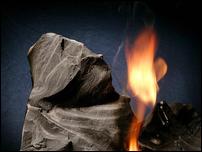 The Uintah County Commission has admitted that it illegally held a closed-door meeting about federal plans to reduce the amount of acreage available for commercial oil shale leasing.

"What all of this has done is force upon local communities the need to deal with a variety of impacts, impacts to their roads, to their schools, to their infrastructure like sewer, water, and law enforcement," said Spehar, who served as mayor of Grand Junction and a Mesa County commissioner.

The report was released in advance of a Friday hearing in which a congressional measure being pushed by Texas Republican will be detailed. The proposal by Rep. Ralph Hall would establish $10 million in subsidies a year for five years for oil shale development, a move Spehar said confounds him.

"This is a subsidy the industry itself has not asked for and comes at a time when we are driving off the fiscal cliff," he said, noting there are a half-dozen oil shale research and development projects on the ground in Colorado and Utah that are being conducted absent any subsidy. "I'm unaware of anybody who has asked for these subsidies."

Spehar said he has seen the "on the ground effects" of failed oil shale pursuits in Colorado, where the small community of Rifle just recently paid off its infrastructure investments from development that was subsidized in the early 1980s.

The report notes that in the ′80s, oil companies received $3.2 billion in loan guarantees and $3.7 billion in price guarantees for oil shale — funded with taxpayer dollars.

"The return on those investments were devastated local economies, abandoned projects and failed oil shale development," according to the report.

In the sparsely populated Rio Blanco County on the Utah/Colorado border, a 48-mile county road that supports industry needs to be repaved — at a cost of $2 million a mile — and Spehar said that will come at the expense of residents, not the oil shale industry.

"Their annual budget is the mid-$30 million range."

With turmoil in the Middle East and price uncertainty at the gas pump, the oil shale-rich region of Colorado, Utah and Wyoming — known as the Green River Formation — has captured the attention of oil companies.

A 2010 report by the Government Accountability Office estimated that the formation contains up to 3 trillion barrels of oil — half of which may be recoverable — or an amount equal to the entire world's proven oil reserves. About 72 percent of the oil shale is beneath federal lands managed by the Bureau of Land Management, which is slated to release new rules on the shale's extraction by the end of the year.

Utah is home to five oil shale development projects, four of which are on state-owned lands and one that is on privately owned lands.