On the 13th day of Christmas, Prodigal Dad buys earplugs

SALT LAKE CITY — My daughter took to listening to Christmas music during the World Series in October to calm her nerves, and fortunately for us all, there was a local radio station that could accommodate her anti-stress pre-holiday needs.

This station plays all-Christmas all the sufferin' time. What I mean by that, for those who aren't gratuitous "s word" users, is that I am starting to be Christmas music-ed out.

"Sufferin'", by the way, is my Grandma Ruby's word. It expressed what she needed to say without offending anyone while retaining that Nampa, Idaho, dairy farmer's charm. 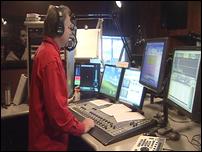 ou've been hearing it since Halloween in some cases, and by now you may be pretty burnt out, but that really doesn't matter because Christmas music will play whether you like it or not.

Her favorite noel hymn is a Russian symphony rock guitar and tuba infused version of “Carol of the Bells,” an arrangement that has been gently combined with the big fairy's waltz from the Nutcracker Suite. I believe this classic is from the soundtrack of “The Christmas Car Chase.”

Now, when I was growing up (which my wife still claims hasn't happened yet) I listened to the music that my parents had selected from their eight-track player collection, which consisted of the Ray Coniff Singers, Mitch Miller, the New Christy Minstrels and the Mormon Tabernacle Choir.

Sometimes we heard a little of the Singing Nun, which wasn't really Christmas, but how can something with smiling nuns on the cover be anything but?

There was nary a "Jingle Bell Rock" or a grandma getting run-over in the bunch. Sometimes my mother had to ask me to turn the volume down when the Mo-Tabs got a bit raucous, as they are known to do during the holidays when they sing to horn accompaniment.

That was as wild as Christmas music got for me.

My daughter Annie wouldn't listen to my kind of Christmas music even if she was trying to put herself to sleep. She says she would keel over of boredom before REM ever manifested itself, and she doesn't want to die that way — though she told me she might try it as an anesthetic if she ever were to go in for a brain operation or a root canal.

Natividad head banging is just not the form of entertainment I would ever choose for the holidays, though there was some head banging going on when my brother brought his girlfriend — Stacy, with two letter i's and an "e" — home last Dec. 25 to meet the family. It was mostly from my wife who was trying to have an old-fashioned Christmas.

Didn't the holidays used to be quieter? Did it always involve extraordinary amounts of patience and ibuprofen?

When Stacy, with two letter i's and an "e", asked my wife which holiday tube-top she should wear for the family photo, my wife put a hole in the wall right next to the hanging of the Three Wise Men made out of clothespins and macaroni some drunkard (or maybe our kindergartener) made for the occasion.

I was only able to calm my wife down by promising her I would Photoshop a turtleneck over Stacy, with two i's and an "e," while I secretly dropped a NyQuil into her eggnog. She calmed down, but not before she chewed off what was left of her Lee Press-ons.

All of this while listening to my daughter's new favorite Christmas CD — Happy Holidays! featuring the Chicago Street Trumpet Quintet, with special guest the Drums of Ipanima.

Had we been listening to something from my collection, like "Sounds from the Christmas Stable," which features, you know … sounds from an actual stable at Christmastime, we could have made it through the evening calmly without a month's allotment of cold medicine from our food storage.

Didn't the holidays used to be quieter? Did it always involve extraordinary amounts of patience and ibuprofen?

Is it a faulty memory of mine, or were there, once upon a time, Christmas lights that didn't come with their own synchronization CD? Whatever happened to "Silent Night"?

Maybe it's up to me to find the real meaning of Christmas for myself and not leave it up to externals. I may have to find inner peace this blessed holiday season on my own, and take satisfaction in my ability to paste a passable sweater on Staciie with Photoshop.

Main image: He's not listening to Christmas music either. (Photo: "Lord of the Rings," Universal Studios)

Davison Cheney writes "The Prodigal Dad" series every week on ksl.com. See his other musings at davisoncheneymegadad.blogspot.com.*