SALT LAKE CITY — A Uintah County man has admitted to taking part in a 2011 confrontation that left one man dead and another critically injured.

Colin Rian Manning pleaded guilty Wednesday in U.S. District Court to charges of assault causing serious bodily injury while within Indian Country and use of a firearm in furtherance of a crime of violence.

Manning, 25, had also faced a charge of murder in the second degree while within Indian Country and another firearms charge. Those were both dismissed by Judge Dale A. Kimball at the request of federal prosecutors as part of Manning's plea agreement.

Uintah County sheriff's detectives say Manning and others accompanied Bruce Silva to a home in Lapoint on June 18, 2011, to confront the person Silva believed had vandalized his car.

Silva, 24, pleaded guilty in May to murder and aggravated assault. He was sentenced to 15 years to life in prison and a consecutive one-to-15-year term. His first parole hearing has been set for May 2037. 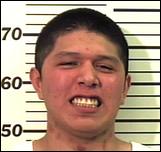 A Uintah County man has been indicted by a federal grand jury for his alleged role in a shooting this summer that killed one person and critically injured another.

Three of Silva's brothers and his girlfriend have all pleaded guilty to felony charges for their roles in Carey's death. Another woman, Teaunna Cesspooch, is undergoing a competency exam to determine whether she's fit to stand trial in state court.

Manning was charged in federal court because he is a member of the Ute Indian Tribe and the shooting occurred within the boundaries of the Uintah-Ouray Indian Reservation. His sentencing is set for Jan. 30.