Romney tsunami: Will his popularity in Utah wipe out the Dems?

630PM: Romney tsunami: Will his popularity in Utah wipe out the Dems?

Romney tsunami: Will his momentum wipe out Utah's Dems?

SALT LAKE CITY — In part thanks to Romney being on the ticket, turnout will be big in Utah this year. The question is: How big? Does it drive turnout it up 5 percent? 10? 12?

For Democrats, it's a potential nightmare scenario if the tsunami wipes out their candidates, especially in close races.

A poll conducted just last week for KSL-TV and the Deseret News by pollster Dan Jones and Associates found 67 percent of Utahns polled backed Governor Romney, with 24 percent supporting President Obama. Do those Romney voters vote Republican on the other down ticket races, or do they cross over and vote for Democrats, and if so which Democrats?

Romney, the former chief of Utah's Olympic organizing committee, is arguably more popular in Utah than any other state, winning nearly 90 percent in Utah's 2008 presidential primary. Does Romney help other Republicans, like Mark Crockett, who is running for Salt Lake County mayor?

"I think turnout helps us this year, yeah," Crockett said. "And it does look like it's going to be tidal wave of people turning out tomorrow."

Crockett said that he thinks some of that credit goes to Romney, calling his run the "most important race in our household." His campaign reminds voters of the Romney connection at every turn, including in campaign mailers that have photos of Crockett with the candidate. 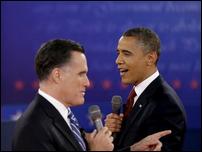 President Barack Obama and Republican Mitt Romney made last-minute pleas for votes Monday, employing their last vestiges of energy, celebrity boosters and plenty of jet fuel to encourage every supporter and the few remaining undecideds to tip the 2012 election in their favor.

Meantime, at the campaign office of his opponent, Democrat Ben McAdams, there's a furious attempt to overcome the turmoil of Romney's tidal wave of support. Over the summer the campaign made 368,000 calls. Now volunteers are looking to get out its supporters with another 32,000 calls Monday and Tuesday.

McAdams' ads, including one with mayors of both parties riding his bus, aim to highlight a bipartisan message.

"We're getting a lot of crossover support. In fact, our polling shows significant republicans are crossing over to support me."

Early voting driven by the excitement could be a factor as well. So far, roughly 40 percent of registered voters have already voted, and tomorrow at the polls it's expected to be busy.

The ballots are coming in in batches of thousands at the elections office of Utah's largest county, Salt Lake. There's an army of temporary election workers 165 strong already processing vote by mail ballots.

"Well, we just go through and scan the ballots and if there are any problems we set them aside to fix it later and we just do this all day," said worker Carolyn King. "It's a lot of fun."

Thanks to the presidential race and tight contests for county mayor and for the 4th Congressional District seat, voter turnout looks robust and possibly record-setting.

Swensen predicts turnout could be as high as 85 percent, which would be record. 75,000 county voters have already voted early, in office.

Nearly, 130,000 county voters asked for mail-in ballots, but tens of thousands have yet to be mailed back in. The tally of those likely won't be known Tuesday evening, so close races may have to wait for final results.

"So, if the race is close we won't know until November 20 at the board of canvassers meeting," Swensen said.