TOOELE — A man who police say choked his girlfriend in a cemetery and then went to a Halloween party where he stabbed two people was arrested Friday.

Tooele police arrested Gabriel Mascarenas, 19, at a relative's home in Tooele on Friday afternoon. He was taken into custody peacefully.

Investigators say Mascarenas' his path of violence started about 9 p.m. Halloween night in the Tooele City Cemetery, where he and his 17-year-old girlfriend were out walking for fun.

At some point, the two got into an argument that became heated, Tooele Police Lt. Paul Wimmer said. It ended when Mascarenas put his hands around his girlfriend's neck and choked her until she passed out, Wimmer said. When the girl came to, Mascarenas was gone.

The teen passed out anywhere from a few seconds to a few minutes, the lieutenant said. The girl then called her mother who picked her up. She was taken later to a local hospital to be treated for her injuries. 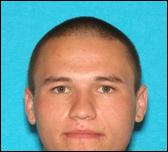 A man who police say strangled his girlfriend in a cemetery and then went to a Halloween party where he stabbed two people remained on the run Thursday.

About 2 a.m., Mascarenas showed up at a party at 379 N. 100 West, police said. The homeowner had heard about the incident at the cemetery by that time and knew police were looking for the man. He told Mascarenas he was not welcome at the house.

That angered Mascarenas, who pulled out a pair of box cutters and stabbed the homeowner, Wimmer said. He also allegedly stabbed another partygoer who tried to intervene.

The homeowner, 36, was flown to a Salt Lake City hospital with puncture and slash wounds to his chest. He was listed in serious but stable condition Thursday, Wimmer said. The other man at the party was treated at a Tooele hospital for stab wounds to his back and was later released.

In 2011, Mascarenas was found guilty of assault resulting in substantial injury. Mascarenas choked his little brother who had confronted him about taking a pair of his shoes, according to Utah court records. When confronted by his father, Mascarenas took a metal bar and hit him in the face and arms.

As part of a plea deal, the charge was reduced from a third-degree felony to a class A misdemeanor and he was given two years of probation. An arrest warrant was issued on June 15 because of failure to comply with that probation, according to court records. He was re-arrested and released again June 26.