Pretrial hearing for Matthew Stewart expected to wrap up Friday

OGDEN — The Ogden man, accused of killing a police officer and injuring six others, will stand trial. A judge decided there was enough evidence against Matthew Stewart after the three-day pretrial.

The charges for Stewart will be for the death of Agent Jared Francom and the attempted murder charges for the six injured officers, and two others who were say they were shot at.

Both the prosecution and defense say this is exactly the outcome they expected.

As the final day of Matthew David Stewart's preliminary hearing began, an ex-girlfriend, Stacy Wilson took the stand. Stewart had no expression, as she claimed he once said that if police ever entered his home, he would go out shooting and wouldn't be taken alive.

"We're glad to be to this point," said Weber County Attorney, Dee Smith. "We're glad that the evidence could finally come out in court."

Prosecutors, who had remained mostly silent until now, express a bit of confidence in their case as Judge Noel Hyde rules that Stewart will be held over for trial.

"There have been a lot of accusations made," Smith said. "There's been a lot of information put out by the defendant's family that hasn't been accurate."

While several agents with the Weber Morgan Narcotics Strike force testified that they were loud, and clear about their presence in Stewart's home, Attorney Randy Richards suggested in closing arguments that there may have been too much yelling by too many officers.

"I did say it was chaotic," Richards said. "I said that I didn't think it was an ambush." 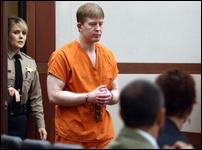 The second day of a preliminary hearing for a man accused of killing a police officer and injuring several others is underway.

Stewart's family members said they were not surprised by the judge's decision.

"We got what we want out of it, and that will be all that we say today," said Stewart's sister-in-law, Erna Stewart.

Prosecutors say 26 bullets were fired by Stewart inside the home with 17 of them striking police, leaving five officers wounded, and Agent Jared Francom killed.

Outside the courthouse, there was a show of support for officers who had to recall those difficult moments on the stand.

"I thought they did a great job," Smith said. "This is very emotional for them, and a difficult 10 months. Weighed against that backdrop, I thought they were all very composed."

Prosecutors say they will not offer a plea deal as they pursue the death penalty.