SPANISH FORK — A young Utahn's death from gastroparesis has sparked national attention from an online community of people suffering from the complicated stomach disease, and a group of doctors has gathered in Utah to discuss treatment.

The young woman, 18-year-old Haley Stonehocker, died last Thursday in her sleep, after more than a year of suffering from a disease that causes paralysis in the stomach muscle, interfering with digestion. It causes nausea and vomiting, similar to morning sickness or the flu, and inhibits the body's ability to receive proper nutrition. Before her death, the young woman was bedridden, hooked to a feeding tube in the hospital.

Stonehocker's friends from the Gastroparesis Patient Association for Cures and Treatments online community traveled from several states to honor her, gathering at Maple Mountain High School, where she was a track star before falling ill. 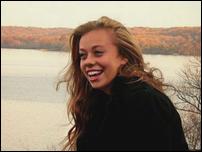 "We needed each other," said Chelsea Rushton, of Syracuse. "And she was my advocate."

Stonehocker was one of six members of G-PACT who has died from the disease in the last few months. Her death has left some gastroparesis patients around the country nervous, because patients do not typically die from the disease, but from malnutrition, infection and other complications associated with treating the illness.

Gastroparesis
What is it?

"There's no wonderful drug," Fortunato said. "We have some treatments including gastric pacemakers that has shown some promise, but in general we really rely on supportive measures."

He said they also rely on lengthy "trial and error" treatments, which can be even more frustrating for patients and their doctors.

"We get to the point where we want to understand the entire mechanism, but we don't necessarily have the time to wait three and four and five years to come up with the scientific explanation," Fortunato said.

Fortunato also says the key to treating this illness is to have a multidisciplinary team, including doctors in the neurosciences, cardiovascular health, gastroenterologists, psychologists, and of course, the patients, listening to the patients.

"Patients basically gave me the idea of where I was going with my research," he said.

In the meantime, Fortunato is advocating for extensive research, including using regenerative methods such as stem cell therapy.