Running my friend through her first marathon

SALT LAKE CITY — Our lives are books comprised of paragraphs of experience that end in periods. Occasionally we have moments that end in a question mark. When we’re lucky, they end with an exclamation point.

Sometimes the exclamation is one of fear. Other times one of joy. Often both.

There were a lot of question marks during her training, which is not unique. Most runners experience moments during training when they truly wonder if they undertook the impossible. Those are the moments some people choose to quit. They leave their story unfinished. Not Hollie.

She persevered through the last few weeks of high mileage training like a champ. She needed a good long run, one that would build her confidence as well as her physical strength. I took her up to Butterfield Canyon and back to my house, where my husband met us with chocolate milk. Our conversations ran the gamut while our feet ran the roads. Normally a slave to my Garmin, I found that I often forgot to check our mileage and time flew. Soon the question of “would” she finish disappeared. The only question that remained was “how” she would finish her race. 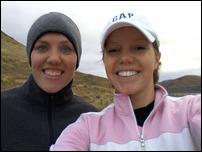 One might think that a brain tumor would make small things matter less. But sometimes it's the smallest things &mdash; shaving your hair or being told you can't run &mdash; that become the very essence of what a person misses most when life turns upside down.

We didn’t get a chance to train much together. Our running paces are very different, and I had a lot of my own race responsibilities to fulfill. But when we could, we did. We tackled mile after mile, hill after hill. With each footstep, we eliminated another question mark.

Before we knew it, the big day approached. Hollie picked me up and we headed to the buses. A self-described morning person, Hollie was the only one on the bus awake enough to chat. She wasn’t nervous, just excited. It was time to finish this chapter.

We started off the early miles with a beautiful sunrise. It was a good omen. Then came the hills, but they were familiar and came early.

At the halfway mark, we met my husband and kids who were volunteering at the aid station. We grabbed some water, posed for pictures, and shared my daughter’s doughnut. It was just the surge of energy we needed. Each mile ended with a period. No big challenges, but no big excitement. Just holding steady.

But it’s usually during a lull in the story that something happens to keep the reader’s interest. This came for us in the form of hills and wind — together and at once. There were no question marks. We both knew the outcome would involve crossing the finish line, but there were a few exclamation marks of frustration and, I’ll admit, a little fear on my part.

It doesn't happen often in life that we get to witness someone else's "exclamation point" moment. Those moments are often deeply personal. Not only did I witness Hollie's, but I experienced it with her.

The last few miles were rough, as they are for everyone. I knew the elation that awaited her at the finish line, but we just needed to get there. I teetered between cheerleader and drill instructor. The chatterbox from the early morning was long gone. Hollie was simply focused on moving forward.

As we made our way down the Jordan River Parkway, we saw Amber, a dear friend, cheering Hollie down the last stretch.

In the distance we saw Hollie’s family. Her son ran toward her all smiles and excitement. Her husband was grinning from ear to ear as she flew past him. I fell back to capture the moment on film. And there it was, the finish line, Hollie’s exclamation point on the end of a very, very long sentence. Exhaustion gave way to elation and relief.

During our run, Hollie expressed her gratitude for me accepting the role of her personal cheerleader. My inner teenager rolls her eyes at this. Not out of brattiness, but because it’s me who is grateful. It doesn’t happen often in life that we get to witness someone else’s “exclamation point” moment. Those moments are often deeply personal. Not only did I witness Hollie’s, but I experienced it with her.

True friendship is a blessing. It’s formed through shared experiences. The best friendships survive the raw exposure of human emotion. Marathons strip away our facade and reveal our true selves. After 26.2 miles of running, we’re simply too tired to fake it! What I saw in Hollie was a determination and strength I admire and love. I saw a fighter. I saw someone unwilling to settle for a life full of questions marks.

Thank you, Hollie, for allowing me to share this “exclamation point” moment with you. Onto the next chapter!