SALT LAKE CITY — Sen. Stuart Reid's plan to modify sex education in Utah could be dead on arrival depending on next month's election.

Reid, R-Ogden, intends to introduce a bill in the next legislative session that would charge the State Office of Education with training parents on how to teach human sexuality to their children.

The idea got a lukewarm reception this week from the Education Interim Committee, and on Thursday, gubernatorial candidate Peter Cooke said he would veto the bill if elected.

In a prepared statement, Cooke said Utah schools should be focused on educating children and not their parents.

"The proposed bill is a way to slowly but surely undermine the sex education program in schools and to eventually remove sex education from school curriculum altogether," Cooke said. "It will also cost money that could be better spent elsewhere, such as on preschool and early childhood education or on closing the $2.2 billion deficit between Utah and the national per-pupil average."

Cooke compared the bill, which is currently in draft form only, to last spring's HB363, which drew heavy criticism from parents and educators and ultimately was vetoed by Gov. Gary Herbert after clearing both legislative houses. 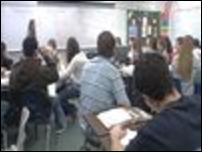 Utah lawmakers want parents to teach sex education to their kids and they want schools to help.

"Here again, we face a sex education bill that should not see the light of day," Cooke said. "As governor, I will veto this bill if it comes to my desk."

At the interim committee's meeting, Reid said his bill would not change the current sex education curriculum or remove sex education from schools. But he also said his motivation for the bill stemmed from a fundamental belief that information on human sexuality should come from parents in the home and not from teachers in a school.