How I ran a 5K with chronic illness

SALT LAKE CITY — I never expected to run a 5K race. In fact, I never expected to run again in my life, period. Having battled chronic illness for 17 years and suffered a serious leg injury 10 years ago, running wasn't even on my mental radar. Over the years just walking has been difficult for me. So you can understand how unimaginable it was for me to believe that I could ever be fit enough to run 3.11 miles. But I am and I did.

The story of how I came to run my first 5K is a miracle of modern medicine and physical and mental determination. I call it a miracle because there's really no other word to describe it. Four months ago I couldn't even walk a city block without it wiping me out for days. That's what Fibromyalgia does to you. It causes endless fatigue and body-wide chronic pain. Sort of like a flu that never ends. I have to admit - there were times I almost lost hope.

But I didn't give up. A year ago I launched into a battery of medical tests, procedures and doctor visits that I hoped would give me answers. It wasn't easy. It's hard to keep your chin up when someone with an M.D. tells you there is nothing they can do for you or that they don't know what's wrong with you. But I also know that doctors don't know everything. They are human too, trying to solve a complex puzzle of symptoms.

And I had a lot of symptoms. Burning pain in my hands and feet. Deep aching and stiffness in my shoulders, back, and thighs each morning. Difficulty sleeping. Brain fog and memory loss. Fatigue that would not quit no matter how much sleep I got. Painful bouts of cramps and intestinal distress, to put it politely. Sometimes I'd wake up feeling like I was literally dying. 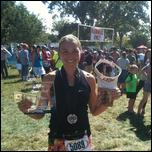 Reasons to Run: Why do you run? I ran to find personal redemption

Why do I run? It depends on the day or the hour you ask. This past weekend I ran to redeem myself.

It didn't take long to find out that my gastrointestinal symptoms were actually Irritable Bowel Syndrome (IBS). A colonoscopy confirmed that I had no sign of inflammation. I began a new medicine for IBS. My gut was relieved.

But the specialists had a more difficult time with my other symptoms. Tests for rheumatic and infectious diseases, like Rheumatoid Arthritis or Lyme Disease, came back normal. I didn't want those illnesses, but each time a test came back normal I felt betrayed and disappointed. Why then was I feeling so awful? What was wrong with my body? I was determined to find out this time.

After they ran out of tests, my rheumatologist told me he suspected Fibromyalgia. You see Fibromyalgia is usually a diagnosis of exclusion. There's no blood test for it. It's also rare in men, who make up only 10 to 20 percent of Fibromyalgia patients. IBS, however, is common in patients with Fibromyalgia. He told me there was no cure but in the last few years there have been major breakthroughs in treatment. Research shows it's likely a neurobiological disorder where pain sensations are amplified by the way your brain processes pain signals. I was a skeptical, but I decided to give the new medication a try.

After only 3 days I knew something had changed. I felt less morning stiffness. The pain wasn't gone but it was manageable. I was more alert at work. And I felt more rested and less fatigued than I had in years. But most importantly, I didn't have any more "dying" sensations. That was confirmation enough.

But years of chronic illness took their toll. A wellness assessment showed I was on the fast track to a middle-aged heart attack. I had to make a change. I needed to get moving. And for the first time in almost two decades I felt well enough to try. Exercise is recommended for Fibromyalgia patients.

I started with walking laps on a local track. It hurt. I shattered my leg in 2002 and the pain from that injury still haunted me. But scans revealed there was nothing wrong aside from a knee that wasn't used to moving. So I kept going. Walking a little more each time than the last. But I never planned on running.

Then one day while walking, about 4 weeks into it, a spontaneous thought popped into my head. What if I ran the next lap? What was the worst that could happen? If I failed, I could just go back to walking. So I ran. Well, sort of. I jogged and barely made it one lap before collapsing. My legs were wobbly and my lungs felt like they were breathing fire. It was painful and hard, but also exhilarating. I felt so alive! So I kept running. Not far. Just enough to gently push my limits, each time running a little farther. I noticed it got easier the more I ran. And I felt better and had more energy during the day.

My sister-in-law, who's a runner, suggested I set a goal to run a 5K. It scared me but thrilled me at the same time. I couldn't imagine running 3.11 miles; I could barely jog a few laps around the track. But I couldn't let it go. I registered for a local 5K, which by coincidence was also a fundraiser for heart disease research. I downloaded a couch-to-5K app on my smartphone and followed it religiously all summer. Each time I ran a little more and walked a little less. After 3 months I was running 20 minutes non-stop, then 25, then 30. I lost 12 pounds amid the sweat and grit.

Then 10 days before the race I had a Fibromyalgia flare to beat all flares. I could hardly get out of bed for 3 days. I was sick. I did what I always do, I pushed through it. But I worried the flare would affect my training. It didn't. Eventually the pain and fatigue eased. I started running again, each time improving on my personal best.

I woke up early to race day. I was ready to run the 5 km or 3.11 miles. I gave it all I had. I breathed in the crisp Autumn air as I stuck to my pace. I pushed myself and shaved 4 minutes off my best training time. I don't remember much except that I felt so at peace, so confident.

Tears welled up in my eyes as I crossed the finish line. I did it. I really did it.

It was a miracle to me.

Peter Waite (@HealingWell) is the founder of HealingWell.com, a 120,000+ member support community focused on living well with chronic illness. He blogs at blog.healingwell.com