Last October, members of the Vietnamese-American Unified Buddhist Association of Utah were displaced from the temple located at 1185 W. 1000 North. A legal battle has ensued over who owns the property and members of the congregation of more than 100 fear it could take the beloved temple away them.

The monks are members of the Vietnamese-American Unified Buddhist Congress in the United States of America. For the past year, the two groups have been embroiled in a legal battle over property rights to the temple in Rose Park.

The Utah group agreed to donate the property to the congress, but that deed was given to a monk without the local group's knowledge.

"So they are very frustrated and they want the congress to return back to them the title," said congress spokesman Thuan Tran. 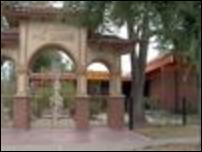 The door was broken and all the paperwork was on the floor. That's what workers at the Vietlink Travel and Services in West Valley City saw when they came to work Friday morning.

Litigation is ongoing, but the dispute has divided the Salt Lake Buddhist community. Local temple leaders even suspected the dispute had something to do with a break-in at their business office two weeks ago, although police have made no arrests in the case.

Utah Sen. Luz Robles, D-Salt Lake, is not involved in the lawsuit but both temples are in her district. She showed up to offer her support to both sides.

"It's a big deal, especially for the Vietnamese Buddhist community,” Robles said. “It's becoming more of a pertinent issue. … There's some frustration going on."

The frustration has been mounting among the local congregation that has worshiped at the Rose Park temple for 19 years. It's also a sacred burial ground for their loved ones who have passed on.