SALT LAKE CITY — With the nation struggling through one of the most economically challenging periods in its history, a group of local activists is offering a solution they believe could help stimulate the economy — raise the minimum wage.

A small group of people supportive of the “Occupy” movement gathered in front of the Wallace Bennett Federal Building in downtown Salt Lake City on Saturday to discuss the ongoing issue of economic disparity.

While the group failed to offer specifics on how much to increase the current rate of $7.25 an hour, spokesman Leon Johnson said the hike is needed to prevent continued hardship on the working class.

“We’re told that raising the minimum wage would bankrupt small businesses and workers would lose their jobs,” he said. “When they say that, they’re saying that workers have to live in poverty.”

“Give me a break,” Johnson said. “Businesses think that raising the minimum wage at all would be too much.” 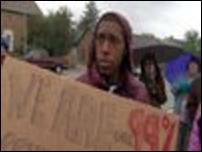 Occupy SLC says 'We are the 99 percent'

He said despite the potential added expense of increasing employee pay, small business owners could prosper if more of the working class were paid higher wages, thereby making them better able to afford more goods and services many of those very workers are helping to produce.

Johnson added: “When the boss starves his workers, he starves the whole economy.”

The gathering was scheduled to mark the one-year anniversary of the Occupy SLC movement in Salt Lake City. The Occupy movement is an international protest movement against social and economic inequality, with its primary goal being to make the economic and power structures in society fairer.