SOUTH JORDAN — One day Reed Thatcher was living an active, generous life. The next day he was fighting just to survive.

"He woke up really late one night (four years ago) and told my mom he had a really bad headache," said his daughter Becky Nielsen. "He was sweaty and clammy, and he got up to use the bathroom and collapsed."

The 79-year-old suffered two kinds of strokes and spent seven weeks at the University of Utah Medical Center. Doctors weren't sure he'd live through the night, so they advised the family to take his recovery day by day.

He battled back, but the body he once used to help his family with projects and physical tasks was now as much a burden as it was a blessing.

"Before the stroke, he did 100 push-ups a day, worked on the loading dock at Kohl's," said Nielsen, one of Thatcher's three children. "He was so active right up until the day before his stroke, he was helping his son-in-law put new floor boards in a condo."

The stroke severely hampered his ability to do some of life simplest tasks. 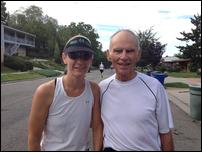 It was just too much rejection, too much humiliation. Woody Whitlock lost the career he'd built for himself — twice. Once was discouraging. Twice was almost unbearable. But he had one thing nobody could take away: That one thing was running.

"He hasn't been able to drive," Nielsen said. "He can walk with a walker, and it didn't affect his mind. But physically, he's pretty limited."

The stroke may have changed Thatcher's physical abilities, but it didn't change his attitude.

"My dad had never complained, ever," said Nielsen. "Even now when he struggles to get up, and then once he does, he's shaky, if you ask him how he is, he always says, 'I'm good, just good.'"

Thatcher and his wife of 57 years, Gloria, moved to a smaller home in South Jordan last year so she could more easily maintain their yard.

That's when they became neighbors with a woman named Trisha Thurber. The former programmer at Hill Air Force Base has been battling brain and skin cancer since April 2011. The disease made it impossible for her to work full-time and she had to sell the home she bought in South Jordan — as well as drain her savings account — in order to pay her mounting medical bills. On Saturday, Sept. 29, her friends and family hosted a 5K fun run to help with her medical expenses.

He never gave up. And he always told us, 'You don't quit.'

So Reed and Gloria Thatcher pinned race bibs neatly on their shirts and walked 5 kilometers for Trish.

It was the farthest he's walked since his stroke.

"He walks about a mile every morning to stay active," said Nielsen. "Doctors told him it would help. He's still just determined to get better. He always says, 'When I get rid of this walker and can do things on my own, I'm buying another truck.'"

His family is inspired by his attitude and efforts on behalf of others every day. This time neighbors, friends and strangers witnessed it. It moved Thurber so much that later Saturday night, she and her mother visited Thatcher in his home.

"They brought my dad a gold medal for walking for Trish," said Nielsen. "They were so touched that he showed up bright and early to show his love and support for Trish even though it is so difficult for him."

Thatcher downplayed his participation. Nielsen reported him saying, 'She's such a nice little gal, I'd do anything to help her.' She continued, "He's just so patient, always really optimistic."

Nielsen said both of her parents inspire her because "it would be so easy to give up." But from the time she was young, they've been preaching a different sermon.

Nielsen said her father guided the family through losing her older brother and her own son, the deaths within nine weeks of each other.

"They just never quit," she said. "They help us all through all of it."