Hansen was the drill team coach for the Vistauns for three years before she left in mid-2011. According to court documents, she stole from the Sky View Vistauns several times. But attorney Herm Olsen believes a very different story will come out in court.

"There's always information, when it comes out that makes people go, ‘Oh, I didn't realize that's what happened,'" Olsen said.

Hansen faces multiple charges of theft, and forgery, but Olsen claims she was dedicated to her job.

"She threw herself into it completely, and worked very hard. Put in so many hours, Olsen said.

Olsen says his client only did as she was told and never intended to steal from the Vistauns. According to an arrest affidavit Hansen wrote up a number of expense reports over the years for materials that "were not purchased at all and she kept the money for herself." 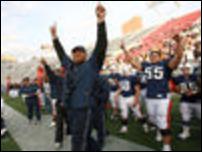 At one point, documents state that she bought costumes from "Arena Design" and that the district later found through an audit that "no such business was on record."

A friend also claimed in a statement that Hansen said "Sky View was not paying (Hansen) what she deserved."

While Olsen wouldn't go into detail he said his client never intended to steal or harm the organization. He said that there were procedural problems that led to the situation.

"Her belief is that was obedient to the process that was provided to her," Olsen said. The defense attorney dis say Hansen did feel overworked but that she loved her job, "a labor of love."

"(I) just hope that people are willing to be fair, and analyze the evidence as it comes out," Olsen said.

School officials did not return our calls for comment on the story.