PLEASANT GROVE — Criminal charges have been filed against a former schoolteacher and coach accused of having sexual relationships with two female students.

Broch DeGraff, 27, was charged Monday in 4th District Court with forcible sodomy, a first-degree felony, and nine counts of forcible sexual abuse, a second-degree felony. He's being held in the Utah County Jail on $50,000 cash bail.

Also Monday, DeGraff's wife filed for divorce from the jailed man. Following DeGraff's arrest last week, she filed a request for a protective order against him.

DeGraff was a teacher and soccer coach at Liahona Preparatory Academy, a Pleasant Grove private school owned by his father, Brent DeGraff. Curriculum at the school for students in kindergarten through 12th grade is based on values of The Church of Jesus Christ of Latter-day Saints.

The charges allege that DeGraff fondled and sexually abused the two 16-year-old girls during separate relationships that police said carried on, one after the other, between October 2011 and June 2012.

Some of the sexual acts occurred at Liahona Preparatory Academy and property adjacent to the school, while others took place at DeGraff's home, according to a police affidavit.

Broch DeGraff was arrested at his Pleasant Grove home last week. Police said they arrested the man after the county attorney's office received information that DeGraff would flee to Mexico if charges were filed against him. 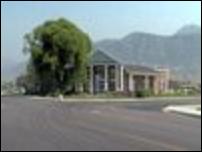 Teacher arrested for sex abuse said he would flee if charged

Prosecutors had reason to believe a schoolteacher and coach accused of having sexual relationships with two female students would flee to Mexico if charges were filed against him, police said.

DeGraff spent two years in Mexico as a child during a bitter custody dispute between Brent DeGraff and then-wife Shauna Pierce.

In September 1986, Brent DeGraff fled to Mexico with his three sons, at the time saying he was circumventing the court process because he didn't want the children subjected to any further physical abuse from their mother, according to a 1994 Deseret News report. Broch DeGraff was 9 at the time.

In the report, Pierce said the allegations of abuse were false and that she spent seven years searching for her children. Brent DeGraff and the children lived in Mexico and Texas before returning to Utah in 1992.

According to court records, the custody dispute was settled in 1996, though no public information about that agreement is available.

Broch DeGraff was fired by Liahona Preparatory Academy in late July or early August when the allegations of sexual abuse surfaced, said Ganel-Lyn Condie, spokeswoman for the school.

The alleged abuse was reported to school administrators after one of the girl's parents learned of the sexual relationship, police said. School officials then notified the Utah Division of Child and Family Services. The girls detailed the incidents during interviews with the division.