Love, Matheson attack each other at dueling press conferences

SALT LAKE CITY — Democratic Rep. Jim Matheson and Republican Mia Love are ratcheting up the political attacks on each other with dueling press conferences Monday.

The six-term congressman intends to talk about Love's record on taxes and spending as mayor of Saratoga Springs.

“Let’s roll tape and hear directly from my opponent about her fiscal record in Saratoga Springs when it comes to increasing taxes and running deficits,” Matheson said in a news release. “Contrast that with my voting record to cut taxes and cap spending during my time in Congress.” 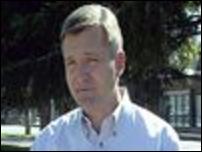 Rep. Jim Matheson and Mia Love don't see eye to eye on much of anything, and how often they should debate is no exception.

Meantime, a group of Saratoga Springs residents will hold a rally in response to what they say are Matheson's untrue statements about the state of the city's finances and public safety.

“I wonder if Jim Matheson would attack and throw Taylorsville, West Valley City or Nephi under the bus if that is where his opponent was from. This isn’t putting Utah first. This seems to be Jim putting Jim first,” Saratoga Springs City Councilman Jefferson Moss said in a statement.