Tinkertoys lead to discoveries for kids and parents alike

SALT LAKE CITY — Visitors at the Discovery Gateway Children's Museum have a new attraction to play with until January — Tinkertoys.

"They stopped producing Tinkertoys for a while, but they recently started producing them again," said Minh Pham, an "imagination facilitator" at the children's museum. "But now they are plastic instead of being wooden."

Tinkertoys are a toy construction kit designed to help kids learn while having fun.

"They've been fun, it focuses a lot on science and reading. Little kids can enjoy them and also big kids," Pham said. "We created a bunch of things, we drew our invention and posted it on the wall. Little kids can come in here and play and form things and build things."

The exhibit is called Tinkertoy: Build Your Imagination, and was created by the Betty Brinn Children's Museum in Milwaukee in collaboration with General Electric and the Playskool division of Hasbro in 2009.

It is designed to give kids educational and fun activities that help them understand how imagination, problem solving and teamwork positively influence everyday life.

"It's fun just to have the different things to do, and she likes to build things," said Katie Gabriel, a patron at the children's museum who was their Saturday with her young daughter. "Plus it's fun that they have something that you can buy outside the store." 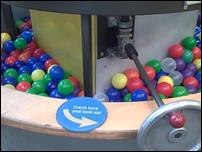 Children's attractions stepping up in fight against germs

Places where kids congregate are getting plenty of extra attention in the face of the H1N1 virus. At the Discovery Gateway Children's Museum in downtown Salt Lake City, the staff has always been waging germ warfare, but now it's in full combat mode. Group services and events coordinator Alissa Buckingham says when your primary demographic is known for putting things in their mouths all the time, you have to be on guard.

It features several stations that let kids experiment with alternative energy and see how things work, all while playing with Tinkertoys.

"This is educational, there's just so much stuff she can play with and color," said Clarissa Baker who was there with Serge Savinskiy and her daughter Destiny. "Video games do not teach you anything."

Savinskiy said it reminds him of when he was a kid with the old children's museum.

"I really appreciate this place. They closed down the old one," Savinskiy said. "Downstairs is almost the same as the old one."

The new Tinkertoy exhibit, like the rest of the exhibits at the children's museum, focuses on learning.

"A lot of it has to do with science and math and the English language," Pham said. "This one talks about pulleys and levers but at the same time your supposed to make a silly sentence out of these words while your cranking the pulleys and levers."

Another station uses a touch screen computer to let kids work together to design what they want to build, and another uses Tinkertoys to build a car that is pushed using wind power.

"All of the little exhibits utilize all that with the tinker toys," Pham said. "I'm seeing a lot of the 10- 11- 12-year-olds making really complex structures."

The exhibit is also in Spanish.