SALT LAKE CITY — A caretaker accused of causing the death of a disabled woman due to constant abuse, including being bound crucifixion-style in a closet, was found guilty on Friday.

A jury found Sherrie Lynn Beckering guilty of aggravated abuse of a disabled adult, a first-degree felony, in the 2011 death of Christina "Nina" Harms. Beckering is the second person convicted in connection with her death.

In March of 2011, Unified police found Harms, 22, dead inside her home at 4978 S. 5415 West. Prosecutors say Harms, who suffered from fetal alcohol syndrome and had the mental capacity of an 8- to 12-year-old, was constantly kept in a small closet where she was forced to eat and go to the bathroom while being bound to a metal bar.

Harms had ligature marks on her ankles consistent with plastic zip ties when officials examined her, severe bruising on her thigh and head, bloodshot eyes, a pepper seed in one of her eyelids, and her hands were completely covered with bandaging material, which would have prevented her from getting the pepper seed out. 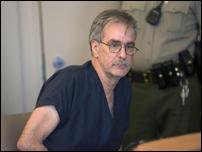 Man sentenced to prison for abuse and death of vulnerable woman

A man charged in connection with the death of a woman living in his home was sent to prison Monday.

Cassandra Shepard, 27, of South Dakota, was Harms' legal guardian. Sherrie Beckering, 51, is Shepard's mother. Beckering and her husband, Dale Beckering, were both arrested and charged. All three lived together in their Kearns house with Harms.

In February, Dale Beckering was sentenced to one to 15 years in prison after he was convicted of a reduced charge of aggravated abuse of a vulnerable adult, a second-degree felony. During sentencing, the judge said he couldn't believe Beckering didn't know what was happening in his house.

Sentencing for Sherrie Beckering is scheduled for Nov. 2.