PROVO — BYU faces a quick turnaround at a tough place to get a win, Boise State. The Broncos have a crazy 80-3 home record since 1999.

Three losses in 13 years? BYU had them on the ropes in 2004, but this year need to to pull off the win. Beating Boise State at their place would be a great way to ignite a rivalry with a great program from Idaho.

Boise State returns the fewest number of starters to their team this year in at least the last seven years. However, there is something interesting about their starters this year. The entire two-deep on the offense are redshirt players and only two defensive starters are not redshirts. 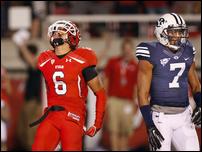 Rivalry week saw one of the most bizarre, exciting and sloppy games in BYU, Utah history.

Boise State's program relies on giving players more experience by redshirting nearly all of their players. They don't have many starters, but they do have some experience. The biggest challenge they face is replacing the all-time record holder at quarterback, Kellen Moore.

The system helps make good QB's, but they will not be nearly as strong on offense with that change. Facing BYU's tough defense could be a challenge for the Broncos.

Boise has a terrific record at protecting the QB. They give up very few sacks each week. This year, the center and right side of the line are new starters.

BYU does a great job pressuring the QB. BYU has sacked the QB 13 times already and have pounded opposing QB's many times forcing early throws. Boise State has not given up a sack this year. I think BYU can attack the right side of the line and force errors by pressuring the QB.

Boise State does get rid of the ball quickly to protect the QB, but BYU then has less time that they have to cover downfield receivers. That should be an interesting facet of the game to watch. Michigan State's defense did a great job controlling the creative Boise offense and limited the run game holding BSU to just 37 yards rushing. BYU is a top-rush defense and should cause Boise some problems. But, defense probably won't score many points this week. That brings up the next objective.

BYU struggled last week on offense against Utah. They haven't had much time this week to work on those problems. However, I believe that the offense is solid and have a good opportunity this week to show improvement.

Boise State is starting nine new starters this year. The main strength of the defense are the cornerbacks. Again, Boise plays lots of guys every game so these new players know how to play, BYU needs to be more consistent moving the football.

Michigan State ran for 213 yards, Miami of Ohio ran for 178. This is a great week to see where BYU stands regarding improvement in their run attack. If the run game goes, the play action pass works, which really helps Riley Nelson. BYU ran for a decent 130 yards(not counting the snap fumble) against a good run-defense team. BYU needs to be able to mix up the run and pass better to help keep the defense off balance. I believe that opportunity exists against Boise State.

Poise and confidence were missing last week. Who knows why (again). Somehow Utah brings out the worst in goofy mistakes. It is important that BYU plays cleaner on offense to regain belief that they have the tools to be a great team.

Like Yogi Berra once said, "90 percent of baseball is mental and the other half is physical." The same is true for football; success builds success. BYU needs to bounce back against tough odds and play a solid complete game. They cannot afford to give up easy points, fumbles or interceptions.

This is a week to be ready at kickoff, play poised with good senior leadership, and improve execution to build for the rest of the season. You are only as good as your last game, so BYU gets to get rid of last weeks bitter feelings and feel good about who they are again.