SALT LAKE CITY -- A long-simmering dispute over the status of an old Jeep track in Canyonlands National Park goes before the 10th U.S. Circuit Court of Appeals in Denver today. The outcome could have far-reaching consequences for Utah's effort to take control of public lands.

The fight deals with Salt Creek Canyon, the primary access to Canyonlands' picturesque Angel Arch. The U.S. National Park Service gated the canyon in 1998, based on complaints from the Southern Utah Wilderness Alliance. SUWA sued the government in 1995, saying Jeep access to the winding, sandy wash was adversely impacting the desert ecosystem.

"We brought it to their attention and they did some studies and finally agreed that the Jeep use was causing a lot of damage in the stream, not surprisingly," SUWA Associate Director Heidi McIntosh said.

But Salt Creek's closure to vehicles prompted a second lawsuit, this from San Juan County and the Utah Attorney General's Office. During a 2009 bench trial, they argued the route qualified as a highway under an obscure federal statute. That law required they prove Salt Creek had seen 10 years of continuous use prior to the park's creation.

Still, the decades-old dispute has not subsided. Congress originally passed the law at issue in 1866, but repealed it in 1976. It had granted state and local governments rights-of-way for the creation of highway systems. Upon its repeal, lawmakers allowed for those existing rights-of-way to stand.

In their appeal, state attorneys are asking the justices to decide what qualifies as "continuous use." They also argue that the law is ambiguous as to what routes qualify for R.S. 2477 status.

"Many of these roads across the state were clearly established prior to 1976," Utah Attorney General's Office Public Lands Section Chief Harry Souvall said. "What we're doing now is proving these were in fact rights-of-way under federal law." 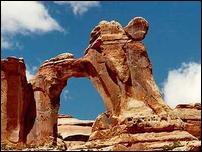 A federal judge sided with the National Park Service, which erected a gate to block motorized access to the Canyonlands' popular Angel Arch more than a decade ago.

In fact, thousands other road segments still in dispute could be impacted by the appeals court's decision in the Salt Creek case. In May, 22 of the state's 29 counties joined the Utah Attorney General's Office in filing lawsuits seeking quiet title to disputed trails and tracks statewide, claiming they too should be recognized as R.S. 2477 rights-of-way.

"This gives us an opportunity to move forward, establish our roads now and put this issue behind us," Souvall said.

SUWA and other allied environmental groups believe it's an effort to shoe-horn roads into areas that would otherwise qualify for special protection. They fear Utah's counties would use the rights-of-way to erode access restrictions or prevent the designation of new wilderness areas.

"They go everywhere," McIntosh said, "into proposed wilderness areas, areas that have already been designated as wilderness, into primitive areas of national parks and the Glen Canyon National Recreation Area."